Prime Minister Justin Trudeau will form another minority government as the Liberal Party will most likely win 158 seats. Despite an untimely election in the middle of the pandemic, the incumbent leader fell short of the necessary 170 seats to form a majority government.

The only silver lining for Mr Trudeau is that the voters trust him to lead Canada. He will have to address the economic issues as soon as the dust settles after the election results.

In comparison to the election cost of C$ 502.4 million in 2019, the federal government reportedly spent C$ 610 million for the snap polls. This may not go down well with the Canadian public as the pandemic has impacted everybody's income.

People are already dubbing Mr Trudeau's snap poll move as unnecessary. At a time when the Canadian economy is hoping to recover from the pandemic losses, the Canadian Prime Minister will have to move on and focus on addressing the key economic challenges: 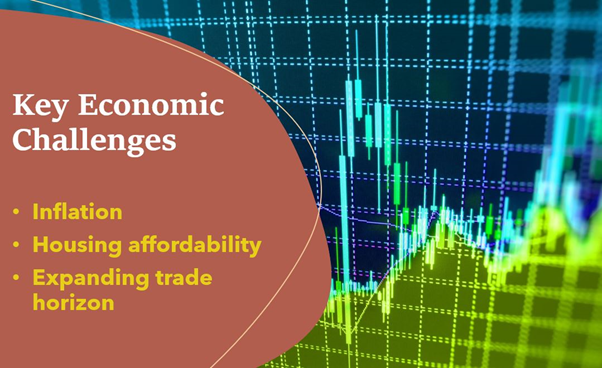 Beating inflation should be the top priority

According to a Statistics Canada report, inflation hit an 18-year high of 4.1 per cent last month. August marked the fifth consecutive month of inflation as supply-chain disruptions and public health restrictions affected the country's economy.

The inflation trends suggest that the price pressures will remain elevated and erode purchasing power.

Prime Minister Trudeau will have to address the issue of inflation on priority otherwise it will put an added pressure on the government to increase the value of unemployment benefits, welfare payments and state pension as the cost of living increases when inflation is high.

The Canadian housing market is becoming increasingly unaffordable against the backdrop of a real-estate frenzy. Housing affordability was a key campaign issue of all the parties for the snap polls and as Justin Trudeau will form the minority government, it would be his responsibility to tackle this issue.

Mr Trudeau will likely impose a temporary restriction on foreign home buyers. However, this move cannot solve this problem alone and the government must look into the issue of supply.

Also Read: What's next for Canadian real estate as Trudeau wins without majority?

According to reports, the demand is higher in comparison to the supply of houses. The government must ensure that enough homes are built as per the population growth.

As the Prime Minister was busy campaigning for the elections, a supergroup of three G20 countries was formed to tackle China and Canada was left out.

The newly formed group will be known as AUKUS and it comprises Australia, the United Kingdom and the United States.

As Canada has not been included in this group, it is time for Justin Trudeau to project Canada as a global supplier of goods and services. The government and companies will have to broaden their trade horizons by forming a strategic partnership with allies and developing countries.

Economy is the backbone of any country and addressing economic challenges should be a top priority for the government.