With Brexit negotiations reaching the final rounds, the UK automotive industry has recently submitted a petition for a zero-tariff trade deal. The call came after a new survey conducted by the Society of Motor Manufacturers and Traders (SMMT) stated that the cost required by the sector to prepare itself for the post-Brexit regime has exceeded £735 million till now. Of this total amount, the industry has spent about £235 million so far this year in bringing about the required changes.

Sources said the entire auto sector in Europe, including the UK, has already lost €100 billion due to the pandemic. The experts and the companies have repeatedly appealed to the EU and UK leaders to see that the sector doesn't lose any more with the implementation of new tariffs from 1 January. An estimate says that another blow could cost the manufacturers another €110 billion.

The study further states that  67 per cent of the companies belonging to the automotive industry in the UK have said that they are doing everything possible to get themselves ready for the new processes which will be in place from 1 January.

For instance, in order to avoid any disruption in the supply chain, 70 per cent of the respondents said they are securing GB Economic Operators Registration and Identification (EORI) numbers, 60 per cent of them said that they are spending significantly on stockpiling and 52 per cent have already hired customs agents.

At the same time, 86 per cent of the respondents said that their efforts were being hampered due to the uncertainty over the future relationship between Britain and the EU.

Even as the industry is fully prepared for a no-deal Brexit, the devastating impact cannot be mitigated. Estimates suggest if we consider only the cars and vans segment, a no-deal Brexit would mean a trade loss of £47 billion over a period of next 5 years.

The industry experts point out that the nation has to secure a zero tariff, zero quota trade deal for the auto industry. Failing it, the scenario would be equivalent to a no deal at all. The pandemic has turned matters worse as the UK auto sector has lost £27.5 billion in car production and sales till now, explained SMMT.

On 24 November, the SMMT requested the top leaders on both sides to discuss the mutual issues for one more time, with an aim to keep the automotive sector in good health and put efforts in getting a deal by Christmas.

Another SMMT study has disclosed that the UK automotive manufacturing industry could incur production losses worth £55.4 billion in the 5 next five years if the sector has to trade on the World Trade Organisation terms. Even if a bare-bone trade deal is agreed upon with minimal benefits, the new arrangement would still cost £14.1 billion to the industry.

Benefits of the UK-EU trade deal 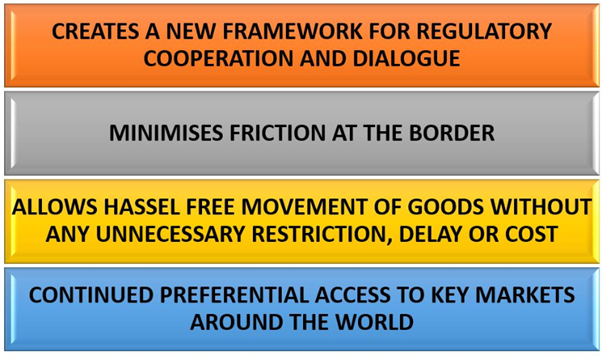 Impact of a no-deal Brexit

Assembly processes would slow down

On an average, there are around 30,000 parts in a car, thousands of which are imported from other countries, before the final product is assembled in a UK factory. A no-deal would complicate the delivery, resulting in the slowdown of the entire assembly process.

Motoring components worth £3.4 billion are exported by the UK to Europe and roughly three times that are imported by the UK. In case of disruptions in the supply chain, the results could be catastrophic. There will be a negative impact on the manufacturing cost if the parts become more expensive and tariffs are imposed at every stage of production. A rise in non-tariff barriers are also on the cards.

A no-deal Brexit would lead to thousands of job cuts as car manufacturers would try to cover up their losses. Also, reduced investment in the UK market, shifting of factories and widespread downsizing would affect the employment of auto engineers and technicians.

Stocks to watch amid Brexit

Brexit has created havoc among all the UK automakers. However, the actual impact of Brexit and the no trade deal is yet to come. Since the Brexit talks were initiated, investment by auto manufacturers has plummeted, thousands of job losses have taken place and a drop in production has been noted.

The automobile industry of the UK is one of the most valuable economic assets of the country with its output totalling £78.9 billion. The sector provides around 180,000 jobs to skilled workers and contributes £15.3 billion annually to the UK economy in terms of value added every year. It makes an investment in R&D worth £3.72 billion on an annual basis.

The UK automotive industry is a fine example of diversity as it consists of various premium car manufactures such as Jaguar Land Rover, Bentley and Aston Martin Lagonda Global Holdings PLC (LON: AML).

Carmakers such as Honda, Nissan and Toyota are known for producing cars for the mainstream audience. The industry is also involved in production of several commercial vehicles, which is dominated by Vauxhall. Ford, the large engine manufacturer also exists, along with companies such as GKN supply automakers in the country. The stocks of all these companies will be strongly impacted and would strengthen or weaken accordingly, depending on the deal outcome.