The inflation rate in Canada spiked by 0.7 per cent year-over-year (YoY) in October 2020, up from a 0.5 per cent increase in September, reported national data agency Statistics Canada on Wednesday, November 18. The jump in the Consumer Price Index (CPI), the report said, was primarily driven by increase in food prices, especially that of lettuce and fresh or frozen chicken.

The CPI climbed about one per cent in October, barring gasoline which was down 12.4 per cent YoY in the month.

On a seasonally adjusted monthly basis, the CPI was 0.3 per cent higher in October, said StatsCan.

The YoY price gain for fresh vegetables in October stood at 9.5 per cent, notably higher than September’s 3.6 per cent increase. The growth was pumped by a 25.6 per cent increase in the prices for lettuce, the national statistics agency pointed.

The meat industry, on the other hand, saw a 1.7 per cent price gain YoY in October. This was a substantial increase from the 0.4 per cent increase in September.

The increase in prices in the meat industry was driven by the 2.4 per cent gain for fresh or frozen chicken, which followed a 2.2 per cent drop in September.

The COVID-19 pandemic has had a solid impact on the food service industry, with the lockdown restrictions interrupting operations and production. The price recovery in October came after the industry implemented production cuts by since May. 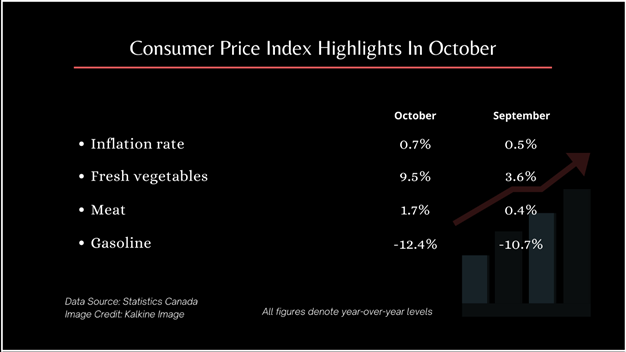 Canada’s mortgage interest cost index dwindled 0.7 per cent in the month of October, following a monthly decline of 0.5 per cent in September. Mortgage rates have seen a decline since the Bank of Canada reduced the benchmark interest rates in March to 0.25 per cent. The Statistics Canada reported also pointed that new home prices have been rising at the fastest pace in 14 years.

The homeowners' replacement cost index, on the other hand, climbed 1.4 per cent in October. The index, which is based on the prices of new homes, saw its largest gain on a monthly basis since June 1991.

Prices of tourist accommodations fell 8.4 per cent in October, which an improvement from that of September.

How Did The Inflation Impact Different Regions In Canada?

Prices climbed across provinces on a year-over-year basis in October 2020. But there were certain notable impacts in different regions.

The coronavirus pandemic has altered the Canadian economy in more than one way this year. Due to the many protocols put in place by the government to restict the spread of the infection, consumers were unable to access a range of goods and services.

For this reason, a list of sub-indexes in the Consumer Price Index (CPI) was imputed from the monthly change, the recent Statistics Canada reported mentioned. These sub-indexes are:

Regionally speaking, price indexes for certain alcohol beverages (such as beer, wine, etc.), which are served in licensed establishments were imputed in Quebec. These were, in most cases, replaced with the indexes of beer, wine and liquor that were bought at stores.

As the aviation industry continues to suffer amid the rising cases of COVID-19 infections, prices of suspended flights were also excluded from the Consumer Price Index of October.

In the month of November, the news of pharma companies Pfizer and Moderna Inc getting increasingly successful results in their respective COVID-19 vaccine candidate trials have impacted the economy. It is likely that the hope of a vaccine for the devastating coronavirus will affect the Consumer Price Index in the coming months as well.