Media reports suggest that the UK government is planning a two-week delay in easing out the coronavirus related restrictions in England, scheduled on 21 June. The number of people with Covid-19 cases has risen by 75 per cent in England for the week ending 4 June, as per the latest official data. Additionally, the rapid spread of the new Delta variant has led scientists to call for a delay in ending the ongoing lockdown.

Wearing of masks and social distancing restrictions are likely to remain in place until 5 July, according to the reports.

The lifting of the last leg of restrictions is expected to see an end to all limits on social contact. All the restrictions on weddings, performances and other events would be removed, and nightclubs would reopen.

Also Read: Are the Vaccines Working? When will Covid-19 end?

Meanwhile, on Friday, 4 June, the number of new confirmed coronavirus cases was 6,238 in the UK. It was the highest recorded daily number since late March, according to the Office for National Statistics. The estimated R number for England was between 1.0 to 1.2 for the last week, up from the lower range of between 1.0 to 1.1 observed during the previous week. The R number calculates the number of people each infected person can potentially pass the virus to.

Also Read: The new economy: 6 ways how the coronavirus has changed the global economy 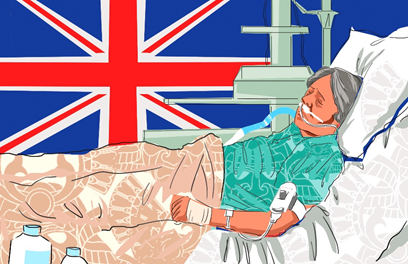 No official call yet

Without giving complete clarity on the issue, Matt Hancock, the British health secretary, has reportedly told Sky News on Sunday that the government was not saying 'No' to 21 June at this point. He and prime minister Boris Johnson would be looking at the latest coronavirus cases data to make a final decision.

The health secretary had noted that the Delta variant was 40 per cent more transmissible than the original Alpha strain. At the same time, the hospitalisations with the new variant were more or less flat, which implied that the Covid vaccines were working, he added.

Few days back, PM had said that he could see nothing in the data that would derail the government plan to end the ongoing lockdown restrictions.

In the meantime, a senior government official said that a variety of options were being looked into, including a delay to step 4 and trading-off certain measures against others, according to a media report by the Financial Times.

The final call on delaying England's lockdown further will be taken on 14 June.

Also Read: How protective are COVID-19 vaccines against new variants?

Government plans to use the period between 21 June to 5 July to accelerate the second shot of the vaccine for people aged over 40s, according to a Telegraph report. It will also be moving from a 12 to an 8-week gap between two doses, which is already being followed for Britons over the 50s.

Hancock expects close to three-fifths of all British adults to get fully-vaccinated by 21 June.