Sir Richard Leese, leader, Manchester city council has requested the UK government to come out with an effective shielding program for the region. There should be no blanket business closures as it would heavily cost the regional economy, he said. Instead, the most vulnerable sections of society should be given adequate protection from catching Covid-19 infections, he indicated.

According to estimates, the Manchester economy would lose out on a monthly business worth £70 million in case pubs and gyms are closed down.

The cost of a shielding program for the region has been estimated to be around £14 million per month, added Sir Leese. This is much less as compared to the cost of business closures, he stressed.

Right now, the NHS (National Health Service, UK) is not fully aware of the most vulnerable people who might need hospitalisation on a priority basis. Its better to find that out and admit those people first who are at the maximum risk of recovering from Covid-19 infections and hospitalise them first, said Sir Leese. These people could be falling in the category of babies, the older ones, and people with respiratory illnesses, blood pressure, or diabetes.

Disagreement with the government

The government is soon imposing a Tier 3 lockdown rule in the Greater Manchester (GM) region, as the number of corona cases are rapidly rising there. It is also mulling over providing extra financial support so that the region can sail through the economic crisis that would follow the tighter restrictions.

In case the tier three rules are imposed, the workers would be getting close to two thirds of their normal salaries, as per the new jobs support scheme that replaces the furlough program from 1 November 2020. However, this lower aid would sadly not be sufficient, lament the experts.

Moreover, the effectiveness of closing pubs and bars, which is a part of tier-3 restrictions, is not known. There is no clear evidence that the virus transmission rate is higher at these drinking joints, so the efficacy of such a policy which closes these businesses is also dubious, explained Sir Richard.

In fact, he insisted that there is opposite evidence in the Greater Manchester region with pubs and bars being well regulated places of meetings. 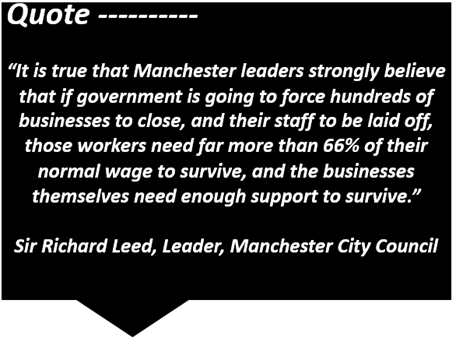 The UK government is in talks with the local leaders in the Greater Manchester region over imposing tier 3 restrictions, but there seems to be a deadlock at present. The government sources only revealed that the discussions are going on, without sharing any further details.

Andy Burnham, Mayor, GM insisted that the furlough scheme should return in his region with the government providing 80 per cent of the total salary of staff for the affected businesses, in case tier- 3 restrictions are implemented. He wrote to Boris Johnson for holding a parliamentary vote to select the government aid for all the regions under tier three regulations. It will bring clarity to the regions going under tighter restrictions.

The government discussions are also on with the local leaders of Teesside, north-east England, west and south Yorkshire, and Nottinghamshire for moving into tier three set of rules in their respective areas.

The main issue is to select the Covid positive people who need be admitted to the hospitals as not every positive case is particularly sick. The number of hospital and ICU cases needs to be systematically scrutinized for admission so that the ones requiring critical care can avail of it on an urgent basis.

The good news is that as compared to March and April 2020, the coronavirus treatments are far better, and the survival rate is also higher. However, if the number of cases keep rising rapidly, people with other ailments might not be able to get timely treatment, which is a worry.

The rate of coronavirus infections has multiplied by three times during the past two weeks, i.e. during 6 to 19 October 2020, according to government sources. Further, there is a forecast that without any further intervention, all the local hospital ICUs would be completely occupied by 8 November 2020, a date which is not too far.

The UK treasury is ready to offer the GM region millions of pounds of fiscal relief to deal with the pandemic and support its businesses, said a government spokesperson. The government is hopeful of reaching an agreement soon.

Media reports suggest that the GM leaders have been given a deadline of mid-day of 20 October 2020 to strike a deal with the UK government over moving to tier-3 set of rules. If the deal is not struck by then, the PM would decide the course of action. Political analysts infer this as top tier restrictions being coming forth in such a scenario.

Talks have been on over this pertinent issue between the two sides for the past ten days.

Local leaders insist that they have not been given any figure for financial relief to be provided, which is worrisome. At the same time, if there are any new government restrictions, the region would be complying with them, they added.

The UK government is trying to impose the three tier set of rules at different places across England so that it can contain the coronavirus infections without imposing another nation-wide lockdown. The first national lockdown that was imposed in March 2020 resulted in huge losses to the economic activity throughout Britain.

Till now, the tier-3 or the highest level of restrictions have been imposed only in two regions namely the Lancashire and the Liverpool.