The Liberal Party is leading with 158 seats, 12 short of the total 170 they needed to form a majority in the House of Commons. The Conservative Party had a total of 119 seats, with 116 elected and three leading.

This means that the Liberals would need support to form the government, mostly NDP’s Jagmeet Singh is projected as a kingmaker.

With the Liberal government returning to power, let’s take a closer look at what this means for the health care sector in Canada.

Trudeau in the election campaign capitalized on his government’s handling of the pandemic and pushed for higher vaccination rates in the days to come.

Canada is now among the most highly vaccinated countries across the globe and leads the G-7 in vaccination rates. In August, the Canadian PM made his stance clear by allowing only vaccinated Canadians to travel by rail or air.

Promises on healthcare and vaccine mandates

In August, Trudeau said that as many as 7,500 family doctors would be hired, and promised student loans and tax incentives for health care professionals.

He also pledged an additional $6 billion to cut down on wait lists in his election campaign. 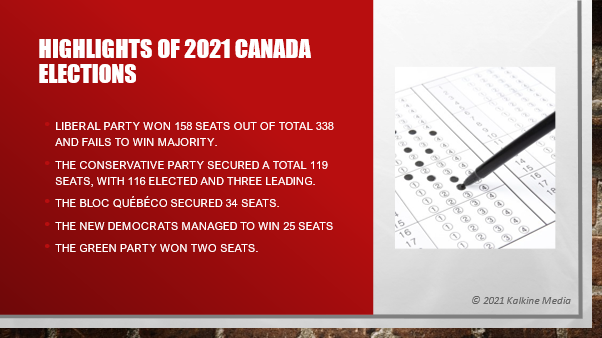 In June 2021, Statistics Canada reported that one in five vacancies are in the healthcare and social assistance sectors in the country. In addition, these sectors faced their largest year-over-year losses in comparison to other sectors in early 2021.

The total vacancies rose by nearly 39 per cent in the sector, with an increased spread being reported across all sub sectors, according to Statistics Canada. However, the job vacancies were mostly in hospitals, nursing and residential care facilities.

The job vacancies could be attributed to several factors like wage offerings, job profiles, skills required, conditions of the local labor market, and recruitment process.

Given the challenges faced in the COVID-19 pandemic, the federal and provincial governments responded by increasing its healthcare capacity by postponing non-urgent scheduled surgeries in 2020, with intake of only emergency and urgent procedures.

Further results from the Canadian Community Health Survey suggest that almost half of the nurses (48.5 per cent) faced high work stress.

The Liberal government also said during the election campaign that nearly five million citizens are without a family doctor.

According to a report released by the Parliamentary Budget Officer on August 4, in order to improve long-term care, the public spending would have to increase by $13.7 billion at first across federal, provincial and territorial governments, with costs expected to grow at 4.1 per cent per year thereafter due to an aging population.

The three-term prime minister also promised that he would push for a new $25 per hour minimum wage for personal support workers (PSW). To achieve this new standard, the federal government will have to work in cooperation with provinces and territories.