The gamble Justin Trudeau took by calling a snap election hasn’t really paid off. At the cost of C$ 600 million, it was, after all, the most expensive election in history. While still holding on to power Trudeau has failed at winning a clear majority.

The House of Commons is projected to look very similar to how it looked after the 2019 election. That said, conservative leader Erin O'Toole has also failed. However, Mr O'Toole didn't shy away from pointing out the C$600-million cost for no change.

Early results showed that the liberals were leading in 158 seats of the House of Commons, just shy of the 170 they needed for a majority. The conservatives were not projected to make any gains either. The only party that seems, right now, to have made any gains are the NDP.

The New Democrats are ahead in 26 ridings two more than they bagged in 2019. It could very well be that leader Jagmeet Singh turns out the kingmaker of the next government. Mr Singh’s party is the only major one that has proposed major tax reform. At the heart of his platform was “tax the ultra-rich.” 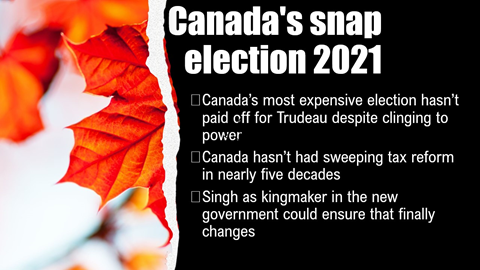 Major tax reform in the works?

As part of its tax and spend rally, the NDP seeks to charge tax on 75 per cent of capital gains as opposed to the current 50 per cent.

It has been over 50 years since Canada has had sweeping tax reform. Trudeau has promised new taxes on Canada's highest earners that will ensure they pay at least 15 per cent. Complexities in the tax system that allow for credits and exemptions are suspect to being exploited. He also wants taxes on tobacco and vaping products as well as on luxury planes, boats and cars.

Given the snap election’s projected results, Mr Singh will fancy his chances at pushing big policies through. The Liberals will need them to get their policies through. Canadians may finally be getting tax reform after half a century. Mr Singh credits his party for people receiving more help during the pandemic. Speaking after the election, he promised he will continue to fight for the common folk.

Trudeau, for his part, wants to hit Canada's biggest banks and insurance companies with higher tax rates he proposes raising the corporate tax rate from 15 to 18 per cent, this would apply to earnings of more than C$ 1 billion. Big banks seem to have emerged from the pandemic relatively unscathed.

Also read: What's next for Canadian real estate as Trudeau wins without majority?

The National Bank of Canada had already said last week that higher taxes were baked in the cake as it looked like a minority government. With Mr Singh and the NDP’s strong showing, widescale tax reform could be coming soon.

However, promises made during a campaign and promises kept after an election are two different things.