The Australian Bureau of Statistics has recently released the Consumer Price Index (CPI) data for the September 2021 quarter. CPI is one of the most common tools used to assess inflation levels in an economy, using the prices of household items and overall housing expenditure.

In Australia, CPI rose by 0.8 per cent in the last quarter, and 3  per cent over the 12 months to the September 2021 quarter. For the first time in six years, the core inflation measures have been above the bottom of the central bank’s 2 to 3 per cent inflation target.

The September quarter was marked with reinstated lockdowns in parts of Australia, which grabbed national businesses by the throat. Many retailers were able to stay afloat through their e-commerce channels, which allowed customers to get at-home delivery of goods. However, global supply shortages in the recent months can partly be blamed for the ongoing inflation rise.

Here is a closer look at the possible causes of Australia’s inflation hike in the September quarter:

While economies across the globe are looking to tone down their fiscal and monetary expansion measures undertaken during the pandemic, Australia has changed little, especially when it comes to the monetary policy. This had largely built CPI hike expectations among economists and market experts, who had long been urging the RBA (Reserve Bank of Australia) to increase lending rates to avoid such a spike in inflation.

However, that is not all. Even as the RBA decided to opt for other contractionary methods, rising fuel prices have been contributing to the observed price surge. CPI’s automotive fuel series reached its highest level in history spanning a half-century. Since mid-2020, fuel prices have risen by a massive 36 per cent while majorly contributing to the annual inflation hike.

Additionally, global supply shortages have prompted a rise in input costs, particularly for the construction sector, with the price rise being ultimately being passed on to the consumers. Supply chain disruptions have also impacted the prices of furniture, motor vehicles and audio-visual equipment.

ALSO READ: What to expect as RBA Shuts Down Wage Growth?

What can be expected?

The central bank had long maintained a tepid stance around inflation rates, stating that core inflation would not reach the target range until mid-2023. However, as had been expected by many economists and experts, inflation quickly overshot the RBA’s expectations. 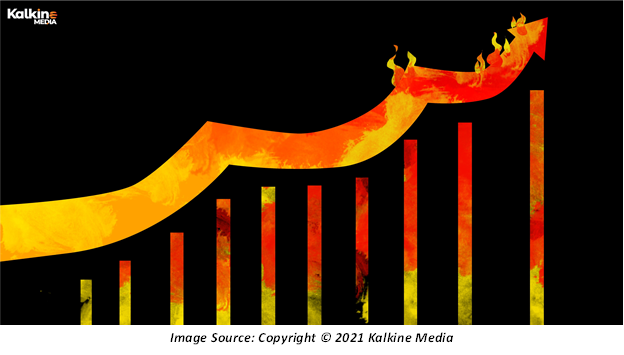 The inflation figures suggest that the RBA may soon have to act on the monetary stimulus front to tackle affordability concerns. So far, the central bank has avoided an interest rate hike as a one-off solution to rising inflation levels as it does not wish to create a shock-like scenario in the economy.

As housing prices have skyrocketed on the back of never-ending demand amid record-low interest rates, a sudden increase in lending rates could potentially cause prices to crash. However, in the coming months, the RBA may be left with little or no choice other than to increase the cash rate.

In a nutshell, letting inflationary pressures settle in the economy may prompt consumers to fret over expenses and save up all their money out of fear. This could hurt consumer confidence, leading to dampened demand and an overall halt in economic activity.

INTERESTING READ: Why falling inflation is not good news