On 06 October 2020, the Australian Government released its FY2020-21 budget where it discussed its economic recovery plan.

Like most countries across the globe, Australia also experienced a significant impact on its health system, community, and economy. On this front, the Government proactively and decisively took steps to tackle the situation. During this period, Australia achieved some of the best health and economic outcomes in the world. Despite this, the Government believes that the impact of COVID-19 would continue in the coming years. COVID-19 did not only disrupted Australian health, the effect was also evident on the lives of Australian citizens.

The Government’s economic response was designed to aid Australian households and businesses through these tough times. It helped keep companies in business and citizens in the job via JobKeeper Payment and Boosting Cash Flow for Employers. The Government also supported Australians in need with the Coronavirus Supplement and A$750 payments to those on specific income support.

In FY2020-21, the Government’s Economic Recovery Plan will aim to restore the economy, generate jobs as well as secure Australia’s future.

The 2020-21 Budget commits additional response and recovery support. Thus, bringing the Government’s overall financial support to A$507 billion. It includes A$257 billion in direct economic aid. The Government highlighted in the budget that the economic recovery plan for Australia aims at growing the economy so Australia can generate jobs, boost financial strength, and build a more competitive and income-generating economy. 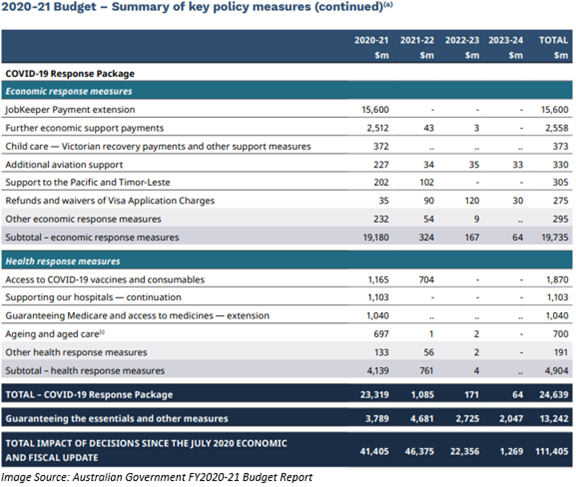 The Government is helping Australian companies to invest, grow and generate new jobs. On that front, the Government is giving a provisional tax incentive, which will be available to ~3.5 million businesses that employ nearly 11.5 million workers.

Other than this, the Government would also allow businesses whose turnover is up to A$5 billion to counterbalance losses against prior profits on which tax was paid, to generate a refund. Loss carry-back will be accessible to nearly 1 million firms that hire up to 8.8 million workers.

A Step Towards Digital Australia:

Amid the pandemic, there has been an increase in the adoption of digital technologies. The adoption has resulted in many companies modifying their operations and continuing to trade through the crisis.

The Government’s Digital Business Plan will develop this impetus to boost an even better adoption of new technologies across the economy to both businesses and consumers.

It will support the country to become a top digital economy by 2030. The Government also announced about an additional A$4.5 billion investment in NBN Co that will bring ultrafast broadband to millions of families and businesses. Grant of A$29.2 million will also speed up the rollout of the 5G network.

INTERESTING READ: As NBN Spread its Tentacles Further, how would it Impact ASX200 Telecom Stocks?

The JobMaker Digital Business Plan will progress the country to become a leading digital economy by 2030.

Other Steps towards the Economic Recovery:

As highlighted above, the Australian Government’s focus is on the economy, generate jobs & secure Australia’s future in FY2020-2021 for it has announced packages for different sectors. Keeping this in mind, let us know about a few companies listed on ASX, where there is a possibility of further growth in FY2021.

Sectors and the Companies Exciting to Look at in FY2021:

Earlier in 2020, the Government had shared its technology outlook and discussed four technologies- Artificial Intelligence, Quantum Computing, IoT and Blockchain. Amid COVID-19 pandemic, Cloud computing and financial technology had an important role to play in supporting the Australian businesses as well as personal usages.

Hence, from this sector, it would be exciting to see how companies like Afterpay Limited (ASX:APT), NextDC Limited (ASX:NXT) and Xero Limited (ASX:XRO) perform in FY2021.

A Quick Look at Six Stocks:

Afterpay Limited: Afterpay delivered a strong performance in FY2020 and was able to expand into Europe with the acquisition of Pagantis. The Company also reached five million active customers in the US.

Xero Limited: Xero recently completed the acquisition of invoice lending platform, Waddle. It performed well in FY2020. It took various steps during the period to support the small business in Australia and abroad.

Transurban Group: Although COVID-19 impacted the FY2020 performance, Transurban continues to be in action mode with West Gate Tunnel Project projected to complete by 2023. It completed three projects in FY2020. Further, the Company also stated that its performance is sensitive to future government responses and overall economic conditions.

Mirvac Group: Despite the challenging COVID-19 environment, the Company delivered solid FY2020 results, with operating profit of A$602 million and DPS of 9.1 cents.

The Company has a robust capital position which would support the business to lessen the impact of the pandemic on the business. Also, Mirvac’s strategy and track record plus the careful approach for its development pipeline will provide a great deal of flexibility after the recovery.