What Is Dogecoin & Why Is Elon Musk Tweeting About It?

Meme-inspired cryptocurrency Dogecoin, or ‘Doge’, soared in the markets after Tesla (TSLA: US or NASDAQ: TSLA) CEO Elon Musk gave it shout-out while lambasting the rising bitcoin in a series of tweets.

The tweets came after crypto giant Bitcoin zoomed past the US$ 23,000-mark last week, reflecting the rising popularity of the virtual currency popular among investors.

Musk went on to change his Twitter profile description, which now reads ‘Former CEO of Dogecoin’ and tweeted a three-word phrase, "One Word: Doge”.

Taking a dig at Bitcoin, Musk tweeted that “Bitcoin is my safe word” and replied on his own thread “Just kidding, who needs a safe word anyway!?” He also posted memes on Bitcoin, calling it “fiat money”.

Fiat money is a currency instituted as money by governments or central banks that does not have real value. It has value only because a monetary regulator maintains its value. The Canadian Dollar, the US Dollar, Pound, Euro and Rubble are all fiat money.

Following the barrage of tweets, Doge stock shot up 20 per cent.

Dogecoin is a cryptocurrency first formed in 2013. It was introduced as a spoof currency featuring with popular internet meme "doge" as its logo, an image of Japanese breed Shiba Inu dog.

Although the peer-to-peer decentralized virtual coin began as a meme miner, it quickly rose. Its current market value is approximately US$ 652 million.

And now, the Tesla maker is calling it Bitcoin’s rival.

Like other cryptocurrencies, Dogecoin is also entirely anonymous and supported by blockchain. It offers a crypto payment wallet that users can use to buy goods and services, or exchange the coin for other currencies such as Bitcoin, Ethereum, Ripple, or conventional currency like dollar, euro, etc. 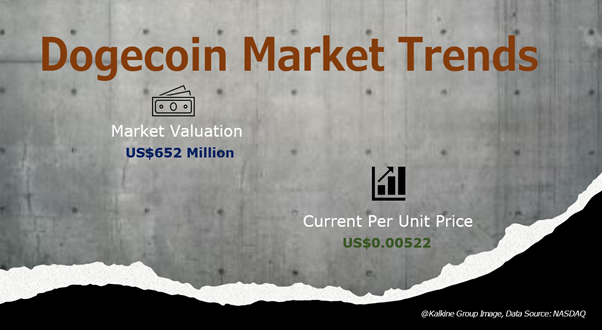 Why Is Elon Musk Tweeting About Dogecoin?

Musk’s tweets on Dogecoin and comparing it to Bitcoin seemed like a criticism on the rising popularity of the latter.

He had previously poked fun at cryptocurrencies and highlighted Bitcoin-related scams. He even said on Twitter, in a conversation with Harry Potter creator J.K. Rowling, that he owned "only 0.25 bitcoins".

The Rise of Dogecoin

Dogecoin’s popularity surged last July when TikTok users started a campaign to drive its price above a dollar. Currently, it is trading at US$ 0.00522 per unit.

Last week, the crypto rally rubbed off on many virtual coins, taking them to their all-time highs.

Digital currencies and cryptocurrencies are also on the verge of recognition and receiving backing from central banks across the world.  Top central banks are planning to launch digital money that is trustworthy, simple to use, and widely available to transfer and receive payments.

Square has already bought a total of 4,709 bitcoins, worth nearly US$ 50 million, as per media reports. The move was targeted to capitalize on the significant surge in crypto value by making it available as an online payment option for their current merchants.