What are CryptoPunk NFTs & which ones sold for the highest prices?

The world of blockchain-based assets offers many choices to investors. Though Bitcoin is the most popular crypto asset globally, others are fast catching up.

Altcoins, which are usually native tokens of blockchain-based projects like Ethereum, probably are the second most popular set of assets. But over the past couple of years, non-fungible tokens or NFTs have piqued the interest of those that are looking for an alternative to even altcoins. One of the most popular types of NFTs are CryptoPunks. Let’s know more.

What is a CryptoPunk NFT?

CryptoPunks are digital assets based on Ethereum’s blockchain network. These are ERC-721 assets, a standard that is unique to NFTs. Every single CryptoPunk collectible art is unique. There are said to be 10,000 such pieces, though intangible, which were initially given without any cost to early claimants.

These owners are now said to be selling their holdings using NFT exchanges like OpenSea. The official website of CryptoPunk states that the overall sales value of all CryptoPunk NFTs was nearly US$2 billion as of writing. Some of the 24x24 pixel art characters of CryptoPunk project have sold for millions of dollars each.

Also read: Why are NFTs valuable?

NFTs are not like a usual cryptocurrency asset that is sold on exchanges like Coinbase. Instead, each of the NFT is unique and does not share its features with others.

It is pertinent to note here that an NFT is just a record of ownership on some blockchain network like Ethereum, and the true value is that of the artwork linked to that NFT. For example, a house in Florida recently sold as an NFT. The price paid by the buyer was for the house.

Similarly, any CryptoPunk NFT’s price is directly linked to the underlying art. CryptoPunks are said to be generated algorithmically, and if these artworks can appeal to art lovers, holders may benefit.

According to reports, CryptoPunk #7523 sold for a whopping US$11.8 million in June last year. Before this sale, CryptoPunk #3100 and CryptoPunk #7804 had also sold for millions of dollars each. 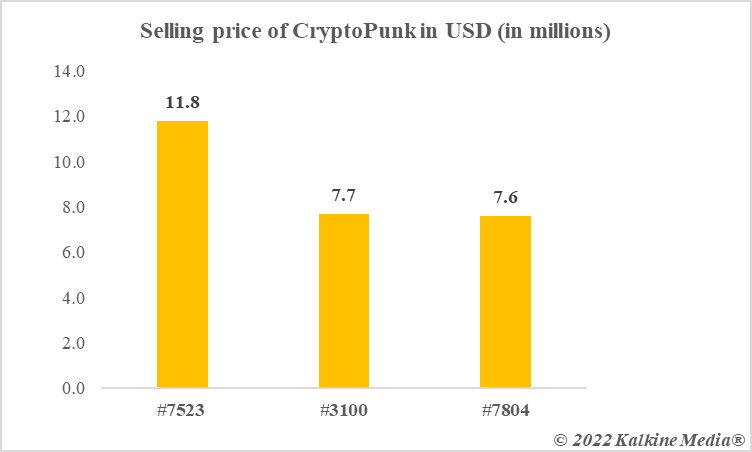 What Are Cryptopunk NFTs & Which Ones Sold For The Highest Prices?

NFTs are seemingly in demand, and everything from a virtual parcel of land to the first tweet of Jack Dorsey is being sold as an NFT. CryptoPunks are popular, and they use the services of Ethereum, which is second only to Bitcoin in the cryptocurrency world. CryptoPunks may become a valued digital asset based on their unique features, which might take the price to even higher levels.

That said, many critics say that NFTs may be overpriced and driven by the blockchain frenzy. The long-term viability of CryptoPunk and other NFT projects remains a wait-and-watch game.