The crypto world is rapidly widening with the introduction of newer cryptocurrencies. The success of cryptocurrencies like Bitcoin and Ethereum has brought many new investors to the market as well. The magnetic effect of the soaring crypto prices has drawn even those individuals to the market who are completely new to the world of trading.

Despite the ever-growing popularity of cryptocurrencies, the market has been subject to major turmoil in the past few months. Recent dips in the value of Bitcoin and altcoins were a cause of major concern among investors who had high stakes involved.

ALSO READ: How Do I Choose the Correct Cryptocurrency?

However, these digital currencies have re-established themselves in the market and have regained their throne. With major developments such as Bitcoin becoming a legal tender in El Salvador, the widespread popularity of cryptocurrencies can not be undermined.

On this note, let us talk about 5 of the top performing cryptocurrencies over the last 12 months.

Earning millions of dollars with a widespread internet joke sounds like a far-fetched reality cooked up by a teenager. Dogecoin has been an example of exactly that, by becoming an internet sensation, starting simply from a meme.

The cryptocurrency has tome and again been endorsed by some famous personalities like Elon Musk. Dogecoin grabbed the limelight when CEO of AMC Entertainment Holdings, Adam Aron started a poll on Twitter asking if his company should accept Dogecoin alongside currently accepted cryptocurrencies. In response, Elon Musk called for the currency’s fees to be dropped significantly for it to be incorporated into the retail setup.

Almost a year ago, Dogecoin was valued at around US$ 0.005. However, currently the cryptocurrency has soared to reach a price of about US$0.225.

The coin’s supply has decreased from it’s initially planned token count of 100 million as the company uses one-fifth of the profits to repurchase and permanently destroy treasury Binance coins every quarter.

RELATED READ: Why is Binance shutting down crypto derivatives for Australian customers?

The crypto is best for those traders who are looking to buy in and out of cryptocurrencies. Thus, the crypto is not suitable for those wanting to hold these tokens for long term. Almost a year ago, Binance coin was valued at a around US$23. However, the coin has skyrocketed to a value of about US$380.

The second largest cryptocurrency in the market, Ethereum has quickly made a spot for itself in the crypto arena as a robust alternative to Bitcoin. Ethereum has found its applicability across various financial areas, with the most notable one being the sale of NFTs.

It also hosts Smart Contracts, which is a collection of codes that can be used to carry out instructions. These Contracts are the underlying technology behind decentralised applications and make the network more secure.

NFTs have helped Ethereum pick up pace in the crypto market. About a year ago, Ethereum was prices at around US$320. However, currently the cryptocurrency is soaring at US$3,074.

Ripple provides a network for money transfers that acts much like SWIFT, a software used by banks and financial intermediaries to keep track of international monetary transactions. Its cryptocurrency XRP, was launched with the aim of facilitating transactions between two currencies or networks.

The Ripple network uses a unique distributed consensus mechanism for validating transactions. Ripple has introduced its cryptocurrency with the special objective of making inter-currency transactions easier.

The evergreen cryptocurrency Bitcoin has been through massive ups and downs in the recent months. The crypto’s name resonates with the term cryptocurrency as it is the largest token in the crypto arena. Most notably, Bitcoin became a legal tender in El Salvador, cementing its place in the financial world further. 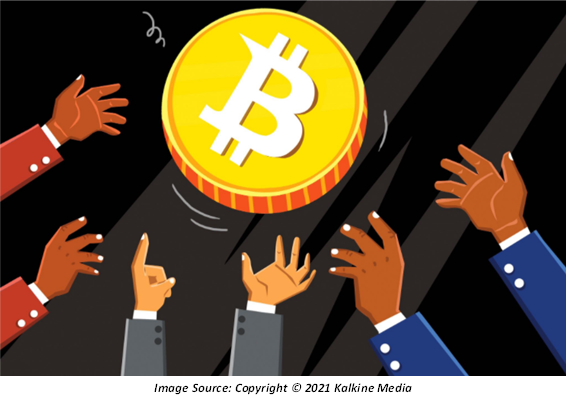 Given that, one should not ignore the high level of volatility that is present in the Bitcoin market. Due to this volatility, Bitcoin still falls short of earning the reputation of “digital gold”.

Bitcoin was priced at around US$10,000. However, the crypto’s value has risen to a jaw dropping figure of around US$43,500 within one year.