Cryptocurrencies may be volatile, but their wealth creating potential cannot be ignored. Calendar 2021 was a year of windfall gains for the backers of Bitcoin, Shiba Inu, Axie Infinity and many other altcoins. The condition was that the investor must have purchased and sold the crypto asset at the right time.

Which is the cryptocurrency with the most potential? A section of analysts may go for Ether, the native token of Ethereum network. The rationale is that Ethereum is widely used within the decentralized tech world. First, it hosts many altcoins as ERC-20 tokens. Second, most non-fungible tokens (NFTs) are stored on Ethereum’s blockchain network. And third, the decentralized finance (DeFi) sub-sector within cryptocurrencies also uses Ethereum.

Does Ether have potential?

Ether has potential, but a lot has changed over the past few years.

These so-called ‘Ethereum-killer’ blockchains also support building of smart contracts and apps. Ether is only used within Ethereum to pay fee. By that measure, its price growth depends on the success and adoption of Ethereum. But with newer blockchains gaining traction, Ether may find it difficult to build onto the 2021 momentum.

Also read: How many cryptocurrencies are there?

Bitcoin price movement over the past couple of months has been erratic. It reached almost US$68,000 in early November but ended 2021 on a disappointing note.

Maybe the market is confused what Bitcoin actually is – a US dollar rival digital currency based on the blockchain technology, or an investment asset that can create wealth for backers. This confusion is the root cause of Bitcoin not being able to reach anywhere near the US$100,000 mark, which many experts had predicted as Bitcoin price target last year.

Shiba Inu is usually termed as a ‘meme currency’. It started as a meme and was promoted as ‘Dogecoin Killer’ during its initial run.

But this cryptocurrency, which trades for under one dollar apiece, may have potential to create wealth like it did for its backers in 2021. And 2022 could be the year when Shiba Inu project gets its own blockchain network. Maybe, Shiba Inu would join the list of Solana and Cardano as a potential Ethereum killer. 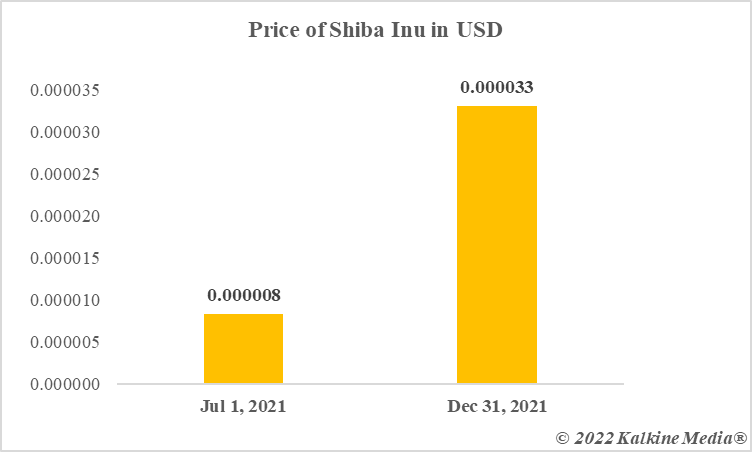 Reports also suggest that Shiba Inu may have a stablecoin soon. Tether, as of now, is the most popular stablecoin, which traders use to trade in various crypto assets. Shiba Inu’s popularity and the sentiment that it is one of Elon Musk’s favorite cryptocurrencies may help Shiba’s stablecoin take lead.

The potential of a cryptocurrency has to be measured by its ability to create wealth for its backers. Ether and Bitcoin may be very popular and dominating crypto assets, but Shiba Inu may have the potential to make its backers rich. That said, crypto investment remains risky, and the timing of investment and exit is the key.