Is Shiba Inu (SHIB) on track to be among top 10 cryptocurrencies?

The year 2021 has been a boon for the crypto market. While prices of many cryptocurrencies saw record highs, Shiba Inu (SHIB) also saw significant traction as its prices rallied.

The global crypto market hit the US$3 trillion mark for the first time on Nov 9, buoyed by bullish trends, mainly due to the robust price gain of Bitcoins. The world’s largest cryptocurrency by market cap hit an all-time high of US$68,521 on Nov 5 amid a weeklong rally.

Likewise, according to predictions based on experts interviewed by analyticsinsight.net, the prices of Shibu Inu may rise to US$0.0003 in early 2022.

Is Shiba Inu (SHIB) on track to be among top 10 cryptocurrencies?

SHIB made a new record last month when its prices hit US$0.00008456, triggered by an online buy petition for the coin. Many new investors bought it, while the native traders added more coins to their portfolios. Currently, it is one of the most popular meme coins after Dogecoin.

Dogecoin, the first meme coin launched in 2013, also saw price rallies. But, notably, SHIB made it to the top 10 cryptocurrency list in October, a significant feat given its modest start in terms of pricing. Although it could not hold on to that position for long, analysts believe it has tremendous potential. In fact, SHIB was ranked above Dogecoin in the top 10 list. 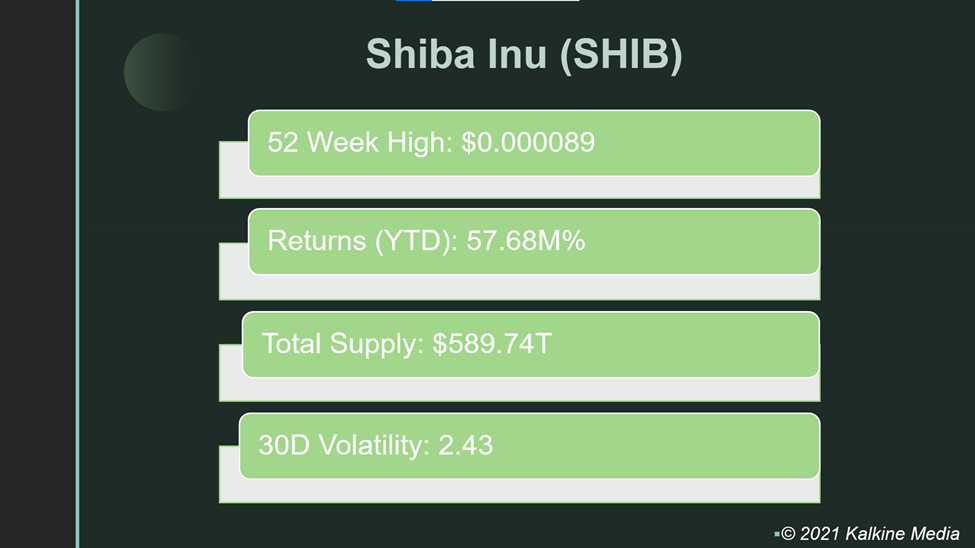 Following the success of Dogecoin, many similar cryptos like Shiba Inu, New Moon, etc., were launched. SHIB made its debut in 2020 with the tag "Dogecoin Killer". Dogecoin drew massive attention from investors in October while the prices rallied.

Like Bitcoin, Shiba Inu was created by an anonymous inventor dubbed Ryoshi. Satoshi Nakamoto is considered the pseudonymous creator of Bitcoin. In addition, Shiba Inu received significant support from Ethereum co-founder Vitalik Buterin, who held around 50% of SHIB coins. Buterin gave away some of his crypto wealth to India's covid relief fund, drawing a lot of attention from the mainstream investors in India abroad.

Although SHIB is currently not among the top 10 cryptos, experts believe it is likely to reclaim that position by early 2022 as they forecast significant price gains for the coin in the coming weeks and months. However, those planning to invest in cryptocurrencies must evaluate these assets and the market thoroughly before investing in the crypto market. They can also study the recent crypto rules enacted by the Biden administration for their safety.