How to buy Manchester City Fan Token & why is it skyrocketing?

The Manchester City Fan Token (CITY) has caught investors' attention and skyrocketed on Wednesday, November 10. At the time of writing, CITY token's one-day volume expanded massively by 4,400 per cent to $119.6 million.

According to the data from CoinMarketCap, the price of Manchester City Fan Token surged 22.5 per cent in the last 24 hours to US$ 17.76 per token.

How to buy Manchester City Fan Token & why is it skyrocketing?

Over the last few months, fan tokens have become prominent as the popularity of the overall cryptocurrency market is increasing. These tokens of sports teams are different from the usual cryptocurrencies as they have a utility in real work.

Fan tokens are bought by crypto enthusiasts with non-digital money like the US dollar and can be used to get certain voting rights and advantages of their sports team.

Also Read: What are fan tokens? A 101 guide to the new cryptomania

Manchester City is one of the top football clubs in the world and plays in the English Premier League (EPL). Let's find out more about the CITY token in this article:

The CITY token is skyrocketing today as Binance announced that it will list the fan token. The trading started for CITY/USDT, CITY/BTC and CITY/BNB among others. 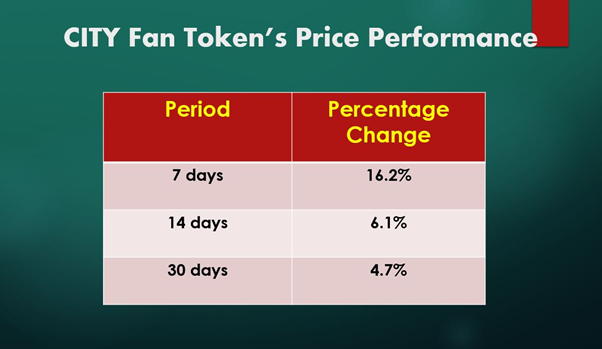 Getting listed on Binance is considered an important feat for fan tokens and cryptocurrencies as it is the largest cryptocurrency exchange.

The Manchester City Fan Token is the utility token of Manchester City Football Club and the fans holding these tokens play a role in taking some club decisions. Apart from this, CITY token holders could get rewards or a chance to interact with the club players.

Also Read: PSG welcomes Messi with some fan tokens. What’s next for the crypto?

The football club's fan token was launched in March 2021 following the huge success of the launch of Champions League rival PSG's fan token in January 2020.

Founded by Socios.com, a fan engagement platform based on the Chiliz blockchain, the Manchester City Fan Token is available for trading on exchanges like FTZ, Chiliz, Paribu and now Binance.

Interested investors could also use the mobile application of Socios to buy the CITY token.