Trading in cryptocurrencies is no longer just limited to Bitcoin, with investors actively showing keen interest in altcoins. One of the most prominent altcoins in the current setup has been Litecoin, which is considered to be the first altcoin to have been introduced in the crypto markets. Interestingly, this cryptocurrency has various features akin to Bitcoin.

A closer look at Litecoin reveals that it was modelled after Bitcoin, and it shares more than just its algorithm with the world’s largest cryptocurrency. Price movements of Litecoin move in tandem with price movements of Bitcoin and are thus, highly correlated with it.

However, unlike Bitcoin, the total supply of Litecoin in the market is much high, almost four times that of Bitcoin. Litecoin has surged by 215% over the past year, starting from around US$46 in late September 2020 to its value of around US$145 in September 2021. So, your US$100 a year ago would have been equal to US$315 today if you have invested in Litecoin!

RELATED READ: What Is Litecoin? How To Buy It?

A slow and steady entrance into the DeFi world

Litecoin is considered a cheaper version of Bitcoin, and in effect, is deemed as Bitcoin ‘lite’. Today, Litecoin can be used to transfer funds directly between individuals or businesses. Just like Bitcoin, the transaction ledger for Litecoin is public and can be accessed by anyone. 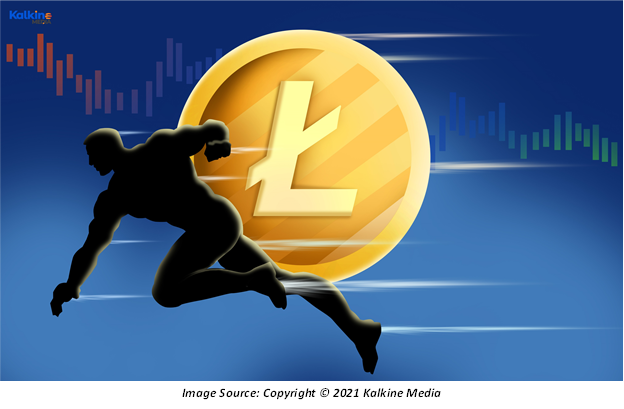 However, a striking feature that gives Litecoin an edge over Bitcoin is the higher speed of transactions. This feature allows Litecoin to process many transactions in a more efficient way than Bitcoin. Additionally, the crypto has amassed huge support from traders and is considered the most broadly accepted digital currency.

Due to its close links with Bitcoin, Litecoin has been hailed as the “silver to Bitcoin’s gold”. Thus, much of Litecoin’s popularity stems from its likeness with Bitcoin and has helped it earn the reputation of being a reliable crypto. The previous year was especially significant for the cryptocurrency realm, especially given the rising DeFi programs being launched at a swift pace. Though Litecoin may not be at the forefront of the DeFi movement, it is slowly gaining acceptance in the area.

DO NOT MISS: Litecoin’s prices roll back after Walmart deal hoax

The cheaper availability of Litecoin has enabled users to transfer funds between exchanges, lending platforms and various other networks to save transfer fees on more expensive platforms. It can be said that the Litecoin network offers security levels at par with leading cryptos, though at a much cheaper rate.

Litecoin is a good cryptocurrency to hold for exposure purposes. The “silver” crypto can be a reliable addition to one’s portfolio. However, many experts suggest that the crypto may not be as good of a store of value as Bitcoin. Therefore, those seeking a cheaper alternative to Bitcoin can explore Litecoin.

INTERESTING READ: The Crypto Heist: Who is the Professor in the Crypto World?