The Axie Infinity (AXS) crypto gained traction on Tuesday, although it slipped over 6%. In the last 24 hours to Tuesday morning, its trading volume fell by 35% compared to the same period in the previous day. Astonishingly, the token gained 11,417% in the past 12 months.

What is Axie Infinity (AXS)?

Axie Infinity is a blockchain-based trading and battle game, partly acquired and managed by its players. The game, inspired by popular games like Pokemon, allows players to collect, breed, raise, battle, and trade token-based creatures called Axies in the game.

Besides, over 500 body parts are available for Axies, such as aquatic and beast. The parts come in four rarity scales: common, rare, ultra-rare, and legendary.

An Axie is a non-fungible token (NFT) that enables players to enter the 3 VS 3 battle. The winning team gains experience points used to level up an Axie's numbers. Axies can be bred together to produce new and unique offspring used or sold on the Axie marketplace.

All you need to know about Axie Infinity (AXS) crypto

The Axie Infinity gaming ecosystem has its unique governing token called Axie Infinity Shards (AXS). These tokens are used for participating in crucial governance votes. They also provide the holder with a say in how the funds from the Axie Community Treasury would be spent.

Co-founders of game developer Sky Mavis, Trung Nguyen and Aleksander Larsen created the Axie Infinity in 2018. The AXS token’s current circulating supply is 60.90 million, and the total supply is 270 million. It is available for trading on exchanges like Binance, Coinbase, Kraken, etc. 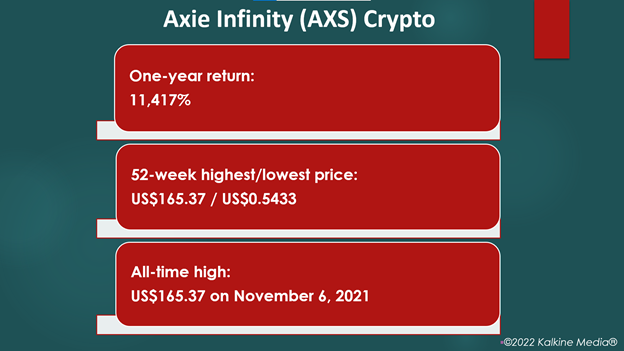 Also Read: Top 2 US financial stocks set to report their earnings this week

Pricing and performance of AXS token:

Blockchain technology has rapidly gained popularity since its use in Bitcoin mining in 2009. The Axie Infinity platform is also gaining popularity because of the gaming opportunity in the crypto space. The Axie NFTs have been drawing huge attention lately.