Shiba Inu is rising, and there are multiple factors behind the price going north. Though many analysts are citing the token’s likely listing on Robinhood exchange as the key driver, there is more to it than meets the eye. One crucial element that nobody seems to be talking about is the price of one SHIB token is quite low, despite its entry into the top ten cryptos by market cap club.

As of now, SHIB is priced at nearly US$0.00007 apiece. However, the market cap is now more than DOGE, the biggest meme token rival of SHIB. DOGE token price is nearly US$0.3.

This set of data points toward crypto enthusiasts’ inclination toward low-priced cryptocurrencies. It could be because crypto investors are looking for not just looking for quick gains, but ‘exorbitant’ short-term profits. Bitcoin is now above US$60,000; however, it too had humble beginnings.

Which Cryptos may script a SHIB-like surge story in 2022?

In this light, let us look at five other crypto tokens with a billion-dollar market cap, but low price. These five are the cryptos to watch after Shiba Inu’s rally.

BitTorrent was always a popular file-sharing platform, even before the blockchain fever hit the market.

For almost twenty years, BitTorrent has been a leading player in peer-to-peer sharing. The platform has undergone a decisive shift ever since it was acquired in 2018 by TRON, a blockchain network. This shift includes a native token of BitTorrent platform, BTT. Unlike other Ethereum-based cryptos, BTT relies on TRON blockchain and uses the TRC-10 standard.

Despite the backlash that BitTorrent platform has received due to allegations of violation of copyright, it remains a dominant player in the entertainment industry.

The addition of blockchain and the introduction of BTT tokens may add more appeal in the coming days.

As of now, BTT is trading at US$0.0034 apiece. The market cap is nearly US$2.2 billion. Any positive development, for example, a big-ticket listing on any crypto exchange, may swell the value of BTT token.

eCash token is said to be developed by the team that was behind another major crypto, Bitcoin Cash. The XEC token is a Bitcoin fork but is claimed to be technically more advanced.

On its website, the project claims to make money transfer as easy and fast as sending an email. Bitcoin ABC, a team of Bitcoin developers, is behind the eCash token. XEC uses the proof-of-stake consensus protocol to validate transactions. It will have a fixed supply like Bitcoin. XEC will be used for staking, and the project itself recognizes ‘low per unit price’ as a driver of ‘bull market appreciation’.

Telcoin is a decentralized finance (DeFi) platform. It claims to enable peer-to-peer finance services on all mobile phones by joining forces with telecom companies across the world. The platform will leverage the blockchain tech to empower users to send money digitally cutting across borders.

Telcoin is said to be regulated by the central bank of Singapore, the Monetary Authority of Singapore (MAS). TEL is the native currency of Telcoin’s Ethereum-based DeFi network. 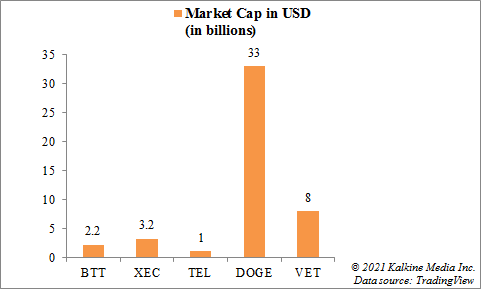 Telcoin is another billion-dollar market cap cryptocurrency with low-priced TEL tokens. As of now, TEL is priced at nearly US$0.018 apiece. At the start of 2021, TEL was priced at nearly US$0.00017. By this measure, the token has gained nearly 10,000 per cent so far in 2021. Since the token is still placed well below a dollar, it makes an interesting ‘less-than-a-dollar’ crypto.

Dogecoin’s name on this list shouldn’t come as a surprise. Shiba Inu always projected itself as a DOGE competitor. In literally no time, SHIB however has surpassed DOGE by a big margin. It is also notable that Dogecoin was the first meme currency to make it to the top-ten cryptos by market cap list.

Dogecoin is an interesting watch due to a couple of reasons. First, Elon Musk has tweeted favorably about this meme currency on more than one occasion. Second, it is said to be used for tipping on platforms like Reddit and Twitter. Lastly, there is no upper limit to the number of DOGE tokens that can be mined.

Year 2021 has so far been a mixed bag for DOGE investors. It rose to nearly US$0.7 in early May 2021. As of now, it is priced at nearly US$0.3. This also shines the light on timing in cryptocurrency investment. A perfect timing can give eye-popping returns in cryptos.

The world is reeling from the supply chain crisis ever since the pandemic broke out. At least one crypto is trying to change the supply chain and logistics space by leveraging blockchain technology.

VeChain claims to create an efficient ecosystem for supply chain with distributed governance. It uses the VeChainThor blockchain with VET as the native token. It claims to infuse transparency in tracking the supplies, besides enabling automation and the Internet of Things (IoT) in the traditional logistics industry.

VET is another multi-billion dollar market cap cryptocurrency with a unit price of less than a dollar. As of now, it is priced at nearly US$0.12 apiece. The market cap of nearly US$8 billion might be a pull for a lot of crypto enthusiasts that seek to own more units by spending a specified amount of money.

Shiba Inu’s rise is being pinned on Elon Musk’s tweet featuring the dog’s image and a likely Robinhood listing of SHIB. One important key driver however could be the token’s low-price attribute. This same feature is available in the above five cryptos costing less than a dollar. This can be a major psychological factor behind a surge in their values in future.