Australian companies engaged in the oil and gas business have been rooting for the use of hydrogen to meet the net-zero emission targets. According to studies, switching to hydrogen produced from renewable sources would be significantly cheaper than the electrification pathway.

Earlier in May 2020, the Australian Energy Minister, Angus Taylor had announced a A$300 million investment in developing the Hydrogen industry. The fund will be allocated by the Clean Energy Finance Corporation as a part of the national hydrogen strategy.

INTERESTING READ: Australia to tap the global opportunity for hydrogen, the fuel of the future 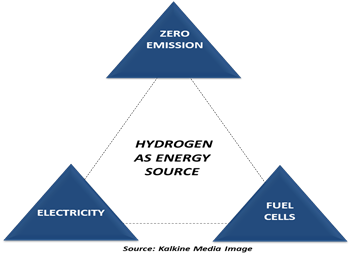 On an industrial scale, hydrogen is produced either by using fossil fuel as a feedstock or through the process of electrolysis. Hydrogen from fossil fuels, primarily natural gas, produces carbon as a by-product and is against the norms of zero emissions.

Electrolysis, on the other hand, splits water into hydrogen and oxygen. The process involves passing high voltage direct current through water which breaks the compound into its constituent elements. The electricity used in the process may be generated from renewable sources, or it may come from the thermal power plant.

The hydrogen produced by the electrolysis process, using the electricity generated from the renewable sources, is termed as “Green Hydrogen”. Hydrogen produced using fossil fuels at any stage of production is known as “Blue Hydrogen.” 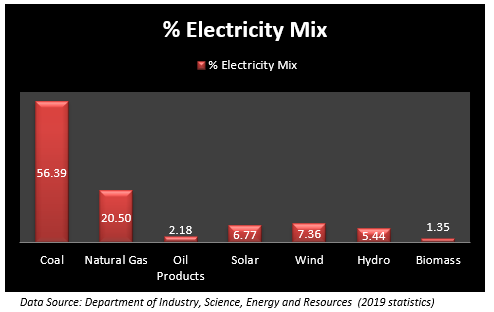 According to the International Energy Agency’s (IEA) June 2019 technology report, the global production of hydrogen is around 70 million tonnes. While less than 1% is produced from water electrolysis, the agency notes that the interest in electrolytic hydrogen is on the rise.

According to an August 2018 ARENA report, Australia could become a major exporter of hydrogen by capturing the markets of Japan, South Korea, and China. The export market potential will be around A$900 million by 2030. ARENA believes that Australia has the technology, skilled human resource, and capability to become a world leader in hydrogen exports as it has already done in the LNG sector.

Let us throw some light on three Australian players engaged in hydrogen projects.

Woodside Energy is one of the largest natural gas producers and pioneers of the Australian LNG industry. Woodside has been shortlisted by Australian Renewable Energy Agency (ARENA) for their ambitious A$70 million funding program to fast-track the development of the renewable hydrogen industry in the country.

Woodside is working on two renewable hydrogen projects which have been shortlisted by ARENA- H2TAS and Badgingarra. The proposed H2TAS is a renewable hydrogen production project with an estimated production capacity of 4.5 tonnes per day of hydrogen. It is a pilot project in partnership with Countrywide Renewable Energy (CRE) located in Bell Bay Advanced Manufacturing Zone in Tasmania.

The Badgingarra project involves the production of Green Hydrogen using solar and wind power plants on Western Australia. The company is partnering with APA Group for the project, which involves transportation of hydrogen through pipelines to Perth.

Woodside Energy in its submission to National Hydrogen Strategy, has stated that with current technology and availability of resources, Blue hydrogen is more cost-efficient and means to build infrastructure and trading relationship which the green hydrogen may inherit in future.

BHP Billiton Nickel West Pty Ltd is a vertically integrated mine-to-market company of the BHP Group Limited (ASX:BHP). The company operates in Western Australia, and 75% of its nickel is sold to the battery material suppliers.

The company is one of the seven companies that have been shortlisted for the A$70 million funding from the ARENA. Nickel West Green hydrogen project will involve installing 10 MW electrolysis unit at its Kwinana Nickel Refinery. The produced hydrogen will be utilized by the plant to generate power for its machinery to cut down the carbon emission.

Kwinana Nickel Refinery is under construction and will produce Nickel Sulphate which is used in lithium-ion batteries for electric vehicles.

Infinite Blue Energy, a Perth based group, is planning an initial public offering (IPO) to raise A$2 million to develop its hydrogen generation facility in Western Australia. The group is planning to get listed in ASX around the first quarter of FY21.

Infinite Blue will become one of the first zero-emission ASX listed company engaged in hydrogen production. The company is planning to start its production by the year 2022. Hydrogen will be produced by the process of electrolysis using the green electricity generated by its solar and wind farms.

Infinite Blue is targeting a production of 25 tons of hydrogen a day from its newly augmented facilities. The company would be supplying the produced hydrogen through the existing natural gas pipelines to the market.