Growth in Canada’s energy sector has stalled since the pandemic unleashed terror on the markets. The third largest sector on Toronto Stock Exchange (TSX), the country’s key bourse, touched historic lows in more than two decades in March this year. Energy is a critical part of the gross domestic product (GDP) and the pandemic’s impact on it is likely to reverberate across the broader economy.

The entire sector is currently grappling with the dual shock of reduced demand due to the pandemic crisis and Saudi Arabia-Russia oil price war that broke out in March.

The nation came to a grinding halt as the federal government enforced strict containment measures, which directly impacted the energy demands, especially in the oil and gas segment. Several Canadian upstream oil and natural gas companies were forced to cut capital expenditures to the tune of C$ 6 billion+ since the spread of the pandemic, says the Canadian Association of Petroleum Producers here.

In the meantime, as COVID-19 spread its tentacles across global economies, the OPEC+ (Organization of the Petroleum Exporting Countries and its allies) deal collapsed. In the battle for oil supremacy, rivals Russia and Saudi Arabia flooded the markets with cheap crude. A price war ensued against the backdrop of nonexistent demand and excess supply, which threatened to eliminate competition. As a result, crude prices plunged to unseen depths with futures for West Texas Intermediate Crude closing at -US $ 37.63 at one point.

A subsequent deal between Saudi and Russia was reached in April, but the damage was already done and Canada's oil-patch melted under strain. By the first half of 2020, seven oil and gas firms had filed for bankruptcies in Canada, data from Insolvency Insider shows.

The post-COVID future of Canadian energy sector will be guided by climate change, clean and sustainable resources and conscious consumers. 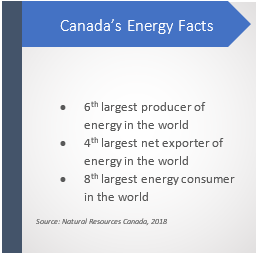 Canada has benefitted from its vast reserves of natural resources and growing oil sands production and continued investments in the energy sector.

It is among the top energy producers of the world, trading with at least 165 countries. The sector’s share (including direct and indirect activities) in the country’s GDP is nearly 11 percent and employs 832,500 people, Natural Resources Canada 2018 data says.

Energy sector also contributed an average of C$ 16.8 billion (between 2013 to 2017) to government coffers via taxes, sales, and royalties, making up for 11 percent of all operating revenues.

As per IEA, global energy demand will rise 24 percent by 2040, with oil and natural gas meeting 53 percent of the requirements. Oil and gas continue to be among Canada’s major domestic exports totaling over C$ 119 billion in 2018, of which 95 percent went to the United States. 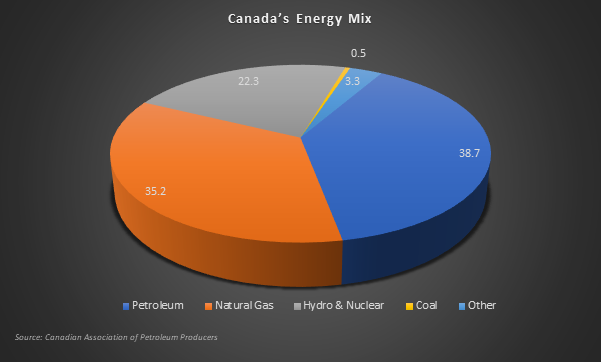 A total of 246 energy companies – including energy services, oil and gas, and utilities and pipelines – are listed on the broader gauge TSX and its sister bourse TSX Venture Exchange (TSXV) making up for a combined market capitalization of C$ 560 billion, data on TSX website indicates. In 2019 alone, 23.4 billion energy company shares were traded on the two indices for a total of value of C$ 350 billion.

Energy is the third largest sector on the TSX, weighing 12.31 percent, and fifth largest on the TSXV with 3.78 percent weightage. Twenty percent of global oil and gas firms are listed on the sister indices making Canada home to world’s largest oil and gas public markets.

Once among the driving forces of the economy, the shares of energy companies dropped sharply during the coronavirus-led market crash in mid-March. The capped energy index on the TSX (TTEN), which has 16 constituent firms, plummeted over 45 percent this year marking the lowest drop in 22 years.

Energy stocks have since charted a slow recovery but are still way below pre-pandemic levels. In the last three months, the capped energy index recovered by 3.18 percentage, giving investors a reason to be optimistic again.

However, let’s not forget, oil and gas stocks were considered risky investments even before the pandemic hit amid the worldwide drive to shift to cleaners, greener and sustainable energy sources.

Below, let’s take a quick look at two trending energy stocks at the moment:

With a current market cap of C$ 84.7 billion, Canadian multinational energy transportation firm Enbridge Inc has become a darling of energy investors. It announced quarterly dividends of C$ 0.81 per share and has a current yield of 7.72 percent and a P/E ratio of 42.40.

Days before the pandemic hit, the company’s shares touched a three-year high in February 2020, before dropping 40 percent by March 19. The shares have since recovered but are yet to regain its pre-pandemic value.

Shares of Canadian oil-sands company Cenovus Energy gained over 57 percent in last three months, signaling a renewed investor interest. It has current market cap of C$ 8.27 billion and 0.478 P/B ratio. Though the company posted losses in the second quarter over depressed oil prices, steps were taken towards restoring oil production.

Cenovus Energy ramped oil production to make the most of recent increase in heavy crude oil prices. Its Christina Lake oil sands field posted record productions as the company leveraged its transportation and marketing options, including pipeline and storage facilities.

Speaking during a post-earning conference call, the company said the worst is over and stronger trends will guide the energy markets into a post-COVID world.

It is hard to predict if energy stocks will make a comeback this year or next year or even later. Going by numbers, the country’s central bank – the Bank of Canada – forecast that the overall economy will recover only by 2022.

For now, the recovery in oil demand can take longer than expected, as worldwide economies grapple with a resurgence in COVID-19 cases and enforce lockdowns again.

The post-COVID future of energy stocks in Canada will also be defined by low carbon emissions, sustainable, clean tech, renewables. Companies investing in them are likely to emerge as the long-term winners.

This website is a service of Kalkine Media Pty. Ltd. A.C.N. 629 651 672. The website has been prepared for informational purposes only and is not intended to be used as a complete source of information on any particular company. Kalkine Media does not in any way endorse or recommend individuals, products or services that may be discussed on this site. Our publications are NOT a solicitation or recommendation to buy, sell or hold. We are neither licensed nor qualified to provide investment advice.
Tags:
energy stocks