Crude oil prices tumbled on Monday after gaining more than 3% in the last week amid rising concerns related to weak economic growth in China, the world’s top oil importer. The prices were also weighted by fears of potential supply stress from a looming European Union ban on Russian crude.

The significant drop in crude oil prices has been witnessed after China revealed its factory activity data on Saturday stating that the country’s economy contracted for a second month to its lowest since February 2020 because of COVID lockdowns.

The prices of both crude oil benchmarks rose earlier in the last week when China’s central bank said that it will pump the country's monetary policy to support the economy which would eventually boost oil demand.

However, the market weighed the country’s plan against a coronavirus-led lockdown in its capital Beijing. 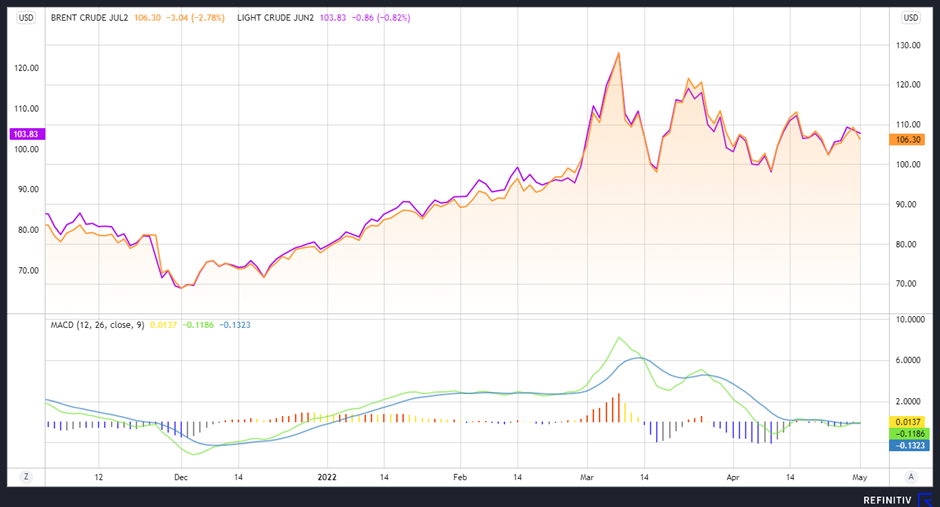 While the number of coronavirus cases has been increasing and demand is squeezing, the supplies are increasing. On Sunday, Libya’s National Oil Corp stated that it would temporarily resume operations at the Zueitina oil terminal to reduce stockpiles in storage tanks to avoid an imminent environmental disaster at the port.

On the flip side, the European Union's leaning towards banning imports of Russian oil by the end of the year has phased out the losses to some extent.

In the absence of European imports, eliminating mobility constraints in China is most important to drive the demand for crude oil.

While Western allies have blocked the import of Russian oil, the impact of global supplies has been cushioned as India has been picking up heavily discounted Russian oil.

Indian refiners are negotiating a six-month oil deal with Russia to import millions of barrels per month.

Energy markets across the globe facing turmoil amid Russia's invasion of Ukraine and subsequent sanctions slapped on Moscow by the United States and its allies.