An impressive recovery amid a sentiment splash has helped copper see strong rally. Copper prices rallied from USD 1.9795 per pound (intraday low on 19 March 2020) on COMEX to the recent high of USD 3.1210 per pound (intraday high on 21 September 2020), to mark a price appreciation of ~ 57.67 per cent.

However, as the supply chain is witnessing a recovery with many mining operations back to nearly full capacity, copper seems to be waiting for fresh rounds of sentiment around the commodity.

But considering the overall global economic scenario, it could be said that the commodity might need to wait a bit now for perception around economic conditions to change before it could continue its next wave.

Many independent forecasters such as the Department of Industry, Innovation and Science (or DIIS) anticipate that copper consumption would witness a downturn ahead over the estimates of negative GDP growth and weak industrial output.

DIIS estimates the global copper consumption to witness a decline of 2.5 per cent in 2020 to reach 23 million tonnes.

Furthermore, while the consumption is estimated to take a hit over the short-term, the supply chain seems to be revamping now.

As per the recent data from the International Copper Study Group (or ICSG), the world mine production that declined by 4 per cent in April-May over stringent lockdown imposed by many nations across the globe, witnessed a recovery in May and eased in June 2020.

Likewise, in the Democratic Republic of Congo (or DRC), the mine production surged by 5 per cent in the recent past with output from ramp-up mines offsetting the temporary closure of the Mutanda mine in December 2019.

In Indonesia, the transition of two major copper mines in 2019 led towards growth of 18 per cent in copper output.

The preliminary data report from ICSG shows that cumulative copper stocks at the end of August 2020 across major exchanges, i.e., LME, SHFE, and COMEX surged by 11 per cent or 33,445 tonnes to stand at 335,832 tonnes with stocks increasing 38 per cent across SHFE, 127 per cent across COMEX and declining 39 per cent across LME.

While there are some short-term challenges ahead of the commodity in terms of a slight hit to the demand from China amid surmounting inventory and restoring supply chain, the market anticipates that copper prices would derive growth from the large EV penetration across the globe, prompting many ASX-listed copper miners to develop prospects.

Furthermore, the EV rush across the globe is picking up some momentum with the cost curve of running an EV coming in parity with the internal combustion engine (or ICE). Also, many nations are now providing hefty subsidies on EV purchase, allowing EV makers to reduce the selling price to take advantage of subsidies and push sales.

In a nutshell, this push towards the electrification of vehicles along with changing battery chemistry holds the potential to bring a radical change in the copper market. 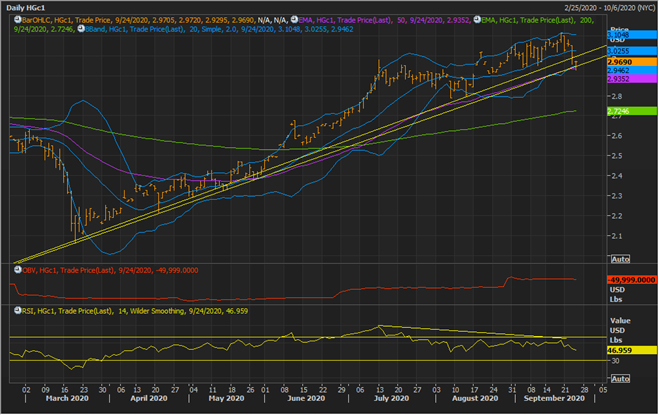 On following the daily chart, it could be seen that copper is currently testing the support trendline, which is overlapping with the 50-day exponential moving average; thus, is decisive in nature. A breach and price action below the same could seed short-term bearish sentiments and vice versa.