Jumbo Interactive (ASX:JIN) is a prominent name in the online and digital lottery retail industry of the Australian continent. The company is officially recognized by the Government of Australia to deliver one of the finest digital lotto experiences in the country. Undoubtedly, Jumbo Interactive has been providing its customers with a best in class and engaging stage to choose from their preferred set of games associated with the brand. Jumbo is proudly known to provide an extremely engaging and entertaining purchase experience to its clients and certainly the vision behind this is to gain the trust of its current customers, retain them with their organic services and the company has been successfully doing so, this can be clearly witnessed by seeing their growing data base of customers by the day. Today Jumbo Interactive has a growing data base with over two million loyal customers associated with the brand.

Jumbo Interactive?s authenticity can be seen with its membership and association with authorized bodies like the Asian Pacific Lottery Association, World Lottery Association and the North American Association of State and Provincial Lotteries. The group has also tied up with the entertainment and lottery giant Tatts Group to provide its services in multiple states. This entitles them to operate in New South Wales, Victoria, Northern Territory, South Australia and Fiji and legally provide numerous lottery offerings by the Tatts Group across these states.

Jumbo promises and delivers the latest technology to its customers with its strong employer base of over hundred diligent individuals and is listed on the Australian Securities Exchange under the ticker JIN.

Back in the year 1995, Brisbane based Mike Veverka founded Jumbo Interactive as a software development and internet service provider company. In 1999, Jumbo Interactive was listed on the Australian Securities Exchange as Jumbomall.com. The company focused towards providing ecommerce services to vendors around the world to help them sell products online via the internet.

It was in 2001, that the Australian Government passed the Interactive Gambling Act and Mike took advantage of the situation, thus shifting the focus of the business towards selling of online tottery tickets. Initially the emphasis was primarily on small scale charity lotteries that were state based. In 2005, Jumbo Interactive acquired TMS Global Services making the company go national. TMS Global Services were already in the business, operating an interactive lottery network since 1984. This was one of the biggest milestones and growth turnarounds for Jumbo. The acquisitions resumed in 2007, with Jumbo acquiring Software publishing Company Manacomm. This gave them the platform and exposure to develop their existing business of Oz Lotteries.

The game changer came in the May of 2017, when the renowned Australian Gaming Tycoon Tatts Group invested a whopping $15.6 Million in Jumbo taking a 15% stake in the company.

Jumbo Interactive provides an online retail platform for purchase of lottery tickets. The services are provided under two categories- Oz Lotteries and Charity Lotteries. Jumbo was one of the earliest adaptors of best in class technology for its clients via its listed platforms. Let?s take a quick view of the brands and lotteries you can purchase from them.

Oz Lotteries is the flagship service provided by Jumbo Interactive. It is one of the leading digital retailers in Australia to host and provide tickets to the most renowned lottery brands in the country. Oz Lotteries is best known for processing more than one hundred fifty million Australian Dollars in the sales of its lotteries in a year. It hosts more than two million customers accounts who are loyal to the brand courtesy its technology and interactive user interface.

Each year uncountable number of lottery enthusiasts and people try their luck with their fortune. Some of the most popular lotteries listed on Oz Lotteries include: 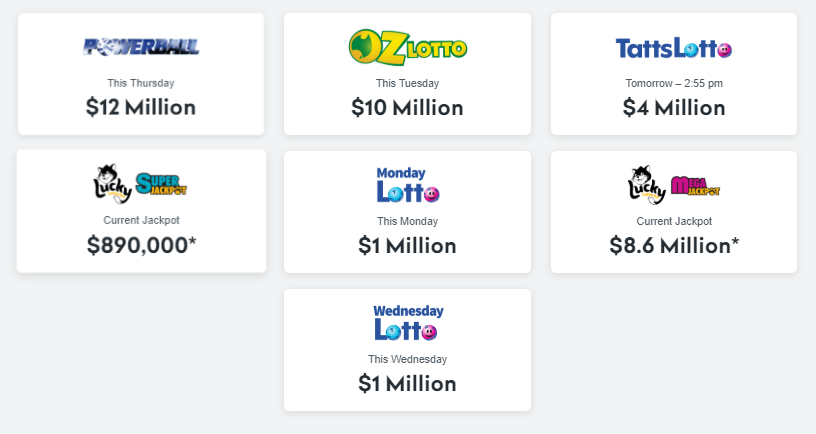 Charity lotteries are a national institution in Australia, and Oz Lotteries encourages the introduction of jackpot lottery players into the market. We are currently selling tickets for some of Australia's best-loved charity lotteries, with further growth on the basis of excellent initial success in the near future.

The prizes on offer will vary from luxury vehicles, reward homes, or gold bullion, depending on the charity; the latter reward is especially appealing to jackpot competitors.

Australian charity lotteries usually have lower-value prizes than national jackpot lotteries, but they have better chances of winning.