Overconsumption of sugar can lead to several health problems and lifestyle diseases such as obesity, diabetes, and tooth decay. A sugar tax is usually imposed to discourage consumption and raise tax revenues. The UK government is looking into a proposal to introduce a sugar and salt tax, apart from the existing sugar tax that came into existence in 2018.

So, can sugar tax bring about a health revolution in the UK?

More than half of London’s adult and teen population is classified as overweight or obese. On an average, England has reported 64,000 deaths a year due to poor diet and overconsumption of sugar, which cost the economy £74 billion till 2018, according to a National Food Strategy review. Sugar tax is being proposed to reduce the sugar content in popular drinks. The tax may be levied on manufacturers who cross the prescribed sugar threshold.

Why sugar tax was introduced

Overconsumption of sugar is the primary reason of many ailments such as obesity, tooth decay, Type 2 diabetes, cardiovascular disease, high blood pressure and others. Consumption of sugar sweetened beverages (SSBs) is the major source of free sugars in the diet, which provide no nutritional gain.

Consumption of excessive sugar can lead also to mood swings. A ‘hit’ of sugar gives a high, but when the sugar gets digested and body releases insulin, it leads to a decline in energy and can lead to complications within the body. According to a survey by Action on Sugar, some of the drinks with highest concentration of sugar are Old Jamaica Ginger Beer, Sainsbury’s Cloudy Lemonade, Fanta Grape Flavoured Drink.

UK public health mister Steve Brine MP said that UK teenagers devour almost a bathtub of drinks that contains a high level of sugar every year on average, which result in many lifestyle diseases. 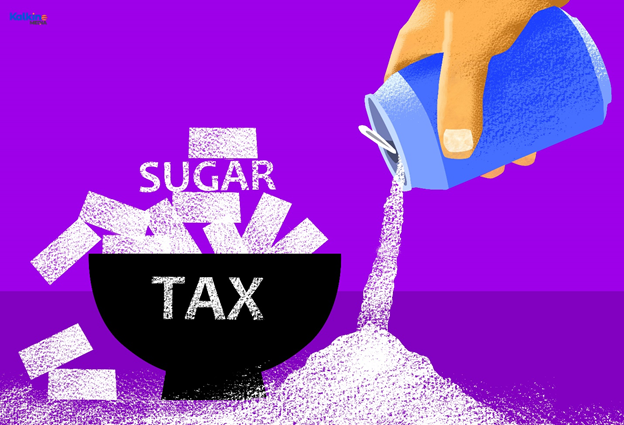 In the UK, the Soft Drinks Industry Levy was introduced in April 2018 as a part of the government’s childhood obesity strategy. But till date as per government records, only 50% of the companies have reformulated their drink composition since the levy was introduced. The companies have reportedly lost £280 million in a year in terms of revenue. So as per the rule, companies who don’t reduce the sugar content will levy with the rate of £0.24 per litre, which is anticipated to raise £240 million every year. The amount generated from the levy will go to the Primary Sports Premium for the creation of Healthy Pupils Capital Fund to improve their sports facilities and provide access to children to the best quality PE equipment.

How are the taxes calculated in the UK

Under Soft Drinks Industry Levy (SDIL), the manufactures/companies are taxed under the given rates:

After the announcement of the levy in 2018, over 50% soft drink companies reformulated their products by reducing the sugar content level. The tax also led to a major cut in the per capita sales and total volume of sugar-sweetened drinks in the UK. As per the government data, sugar consumption in all soft drinks fell 30%.

Over the years it was noticed that the levy has prompted the manufacturers to rethink and rebrand their products. A study in BMC Medicine found that six of the 10 ten brands were affected by the SDIL and has offered healthier options.

In a nutshell, people in the UK on an average consume 195 excess calories daily. If half of the obese people reduce their daily food intake by 250 calories, they can reduce their BMI within a year. This can benefit 10 million people a year as the reduction in sugar intake would ensure that they can enjoy two more years of healthy life.