VMware Inc (NYSE: VMW, VMW: US) and Broadcom Inc (NASDAQ: AVGO, AVGO: US) have been trending higher on the stock markets after they announced their acquisition agreement on Thursday, May 26. In addition, Broadcom and VMware have also delivered their latest quarter results.

Broadcom, a semiconductor technology company, has said that it is set to acquire VMware, a multi-cloud services provider, for about US$ 61 billion in a cash-and-stock transaction. According to the deal, the chipmaker will also assume US$ 8 billion of the software company's net debt.

What should you know about the VMware-Broadcom deal?

Upon closing the acquisition, the semiconductor company is set to rebrand and operate as VMware, the company said. A US$ 21-billion market cap company, Broadcom said it will also incorporate its existing information and technology (IT) infrastructure as a part of its expanded VMware portfolio.

As per the agreement, VMware shareholders will have an option to receive a cash payment of either USS$ 142.50 or 0.252 shares of Broadcom for each VMW share.

In addition, Broadcom projects to continue its current dividend policy of returning 50 per cent of its previous year's free cash flows (FCF) to shareholders. 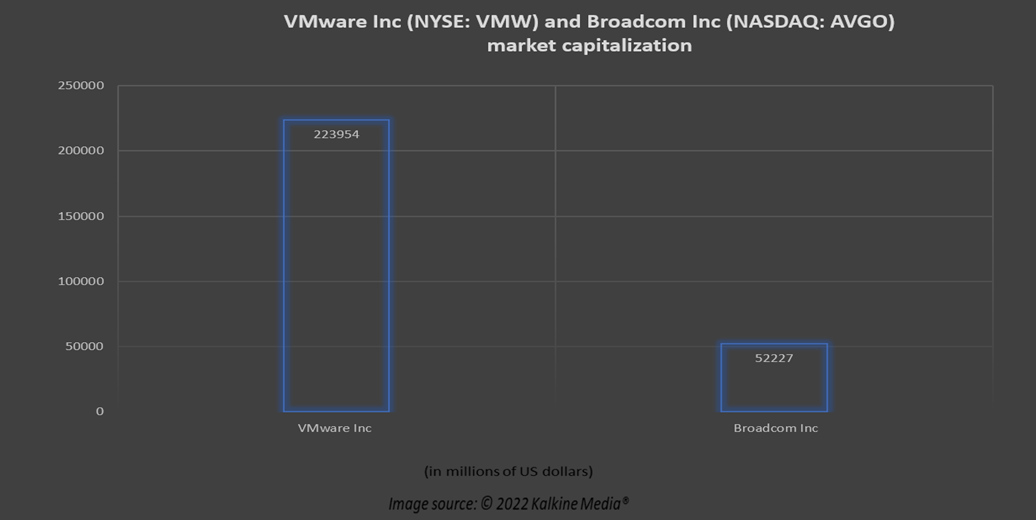 VMware holds a market capitalization of US$ 51 billion. The technology company reported a revenue of US$ 3.09 billion in Q1 FY2023, three per cent higher than Q1 FY2022. The company pointed out that continued momentum in subscription and Software-as-a-Service (SaaS) business accounted for 29 per cent of total revenue in the latest quarter.

VMware also expanded its partnership with Google Cloud to expedite application modernization and cloud transformation for its customers.

VMW stock rose by over 30 per cent in one week. As per Refinitiv findings, VMW seems to have gained attention on the stock market as its Relative Strength Index (RSI) value boosted to 67.28 on May 26.

Broadcom saw its revenue climb 23 per cent year-over-year (YoY) to US$ 8.1 billion in Q2 FY2022. The California-headquartered semiconductor company reported increased net earnings of US$ 2.59 billion in the latest quarter compared to US$ 1.49 billion a year earlier.

Broadcom also reported a YoY surge of US$ 715 million in its FCF to US$ 4.15 billion in Q2 FY2022. In addition, the large-cap company also announced a quarterly dividend of US$ 4.10 per share, scheduled for June 30.

Also, Broadcom anticipates its revenue to reach around US$ 8.4 billion and adjusted EBITDA of about 63.5 per cent of expected revenue in Q3 FY2022.

The acquisition deal between VMware Inc and Broadcom Inc is subject to regulatory and VMware shareholders' approvals and additional customary conditions. According to the official statement, this transaction is anticipated to close in fiscal 2023 (as per Broadcom books).