Dye & Durham (TSX: DND) stocks are still on the rise since they skyrocketed by over 14 per cent on Friday, May 13, despite volatility in the tech sector. DND stock was up by over four per cent at 11:37 AM EST on Monday, while the S&P/ TSX Capped Technology Index has fallen by almost 36 per cent year-to-date (YTD).

This spike in its stock prices comes as the company released its latest earnings report last week and reportedly expressed confidence in its plans to close the acquisition of Link Group (ASX: LNK) despite concerns around rejection risk from regulators.

The companies announced their acquisition deal of C$ 3.2 billion in December 2021 and expect to close it in August this year.

As its stock price rises, let us discuss this Canadian tech company in detail.

Dye & Durham Limited recorded a year-over-year (YoY) surge of 78 per cent in its revenue of C$ 122.9 million in the third quarter of FY2022. The company said that this revenue growth was mainly due to previous acquisitions and the realization of revenue synergies.

The company said that increased operating income (mainly due to revenue increment) led to an improvement of C$ 3.6 million to a loss of C$ 7 million in the latest quarter compared to Q3 2021.

While disclosing its Q3 FY2022 results, the small-cap technology company also declared a quarterly dividend of C$ 0.019, to be paid on June 17. 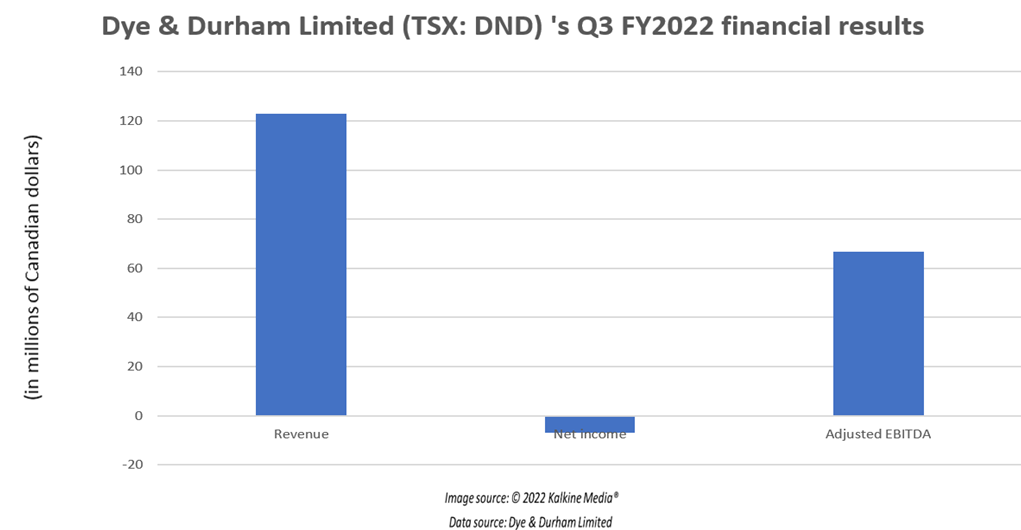 Its price-to-earnings (P/E) ratio was higher at 60.90. A high P/E ratio, generally above 11, indicates that the stock is overvalued. But its debt-to-equity (D/E) ratio was 2.32, indicating that the risk level could be considered as high.

Dye & Durham Limited, a small-cap company, could provide some growth potential as it is still focused on its business strategies despite the tech breakdown. The tech company also improved its revenue and contracted its net loss in Q3 FY2022. However, its valuation metrics like the P/E ratio and D/E ratio indicate that DND's risk level could be counted as significant.