This surge comes amid reports of the Canadian ridesharing app mulling over filing for bankruptcy.

Facedrive’s latest corporate update was posted last week, on September 8, where the company addressed “concerns” regarding its “long-term plans”.

Notably, in the wake of the stock price surge on Thursday, the Investment Industry Regulatory Organization of Canada (IIROC) had halted Facedrive stock’s trading more than once during the session.

So, what all do you need to know about Facedrive’s business and stock status? Let’s find out.

Earlier in September, Facedrive’s former CEO and chairperson Sayan Navaratnam announced his resignation and, in the same announcement, lashed out at one of the company’s co-founders, Imran Khan, for selling his shares in the firm.

Mr Navaratnam noted in his statement that Mr Khan “sold hundreds of thousands of Facedrive shares and made millions of dollars”. This, the former CEO said, had has a “dramatic impact” on Facedrive’s share value.

Mr Khan, on the other hand, released his own statement in his defense on September 6. In it, he also claimed he has received a notice from Facedrive’s lawyers hinting that the company is contemplating filing for bankruptcy protection. 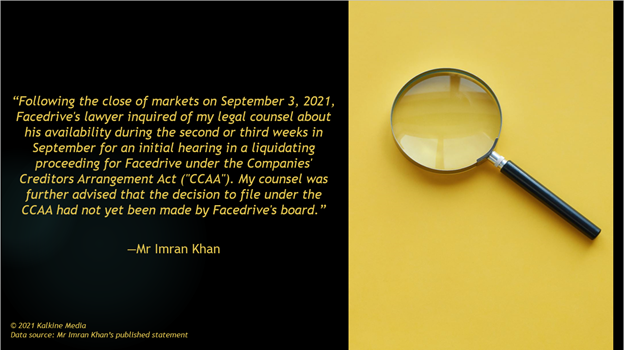 In response to Mr Khan’s claims, Facedrive put out a statement saying that it is looking into “numerous strategic paths”, but has not yet determined “any of the potential paths”.

In addition, the firm confirmed filing a statement of claim against Mr Khan in the Superior Court of Justice of Ontario in regard to the trading allegations and violating a share lock up agreement.

On Monday, September 13, Mr Khan revealed that he recently disposed of about 8.4 million of his shares in the company to “a family trust”.

Since the beginning of this year, Facedrive stock price has plummeted by nearly 88 per cent (as of September 16 close). It also posts a six month’s decline of about 93 per cent.

Despite the surge in Thursday’s trading session, Facedrive scrips fell by almost 62 per cent this month. Its price-to-earnings (P/E) ratio stands at a negative -4.2.

Facedrive stands out in the field of ridesharing services for its sustainable and eco-friendly approaches. Since its inception, it has also expanded its operations to provide food deliveries, retail services and contact tracing for COVID-19.

As for where the company lands regarding the bankruptcy claims, only time will tell.