Accounts of thousands of Canadians were compromised in two recent cyberattacks on the Canada Revenue Agency. In the latest incident, the cybercriminals reportedly targeted over 48000 accounts. These acts highlight vulnerability and inadequacy of the high and mighty, including federal digital assets. Following these attacks, the cybersecurity space was once again thrust into the spotlight. As a result, stocks of Blackberry (TSX: BB) and Absolute Software (TSX: ABT) posted good gains over the last couple of months.

These circumstances have fueled the hopes of the industry. Increasing reports of cyberattack incidents are surfacing as more employees work from home or use payment getaways. Let us delve into the stock performance of two cybersecurity tech stocks below:

After exiting the smartphone business, Blackberry zeroed on its security features, becoming leaders in the new world filled with cybercrimes. It posted an impressive turnaround, establishing itself as a leading global cybersecurity firm.

Blackberry stocks have declined by 26 per cent year-to-date due to the pandemic-caused market crash. However, in the last six months, the shares rebounded by nearly 35 per cent. The scrips again plunged by nine per cent in a month. In the last 10 days, the average trading volume for the stock was 2.39 million. Its current market cap is C$ 3.4 billion. As per data on the Toronto Stock Exchange, the stock has a price-to-earnings ratio of 1.33 percent and price-to-cash flow ratio of 38.4. 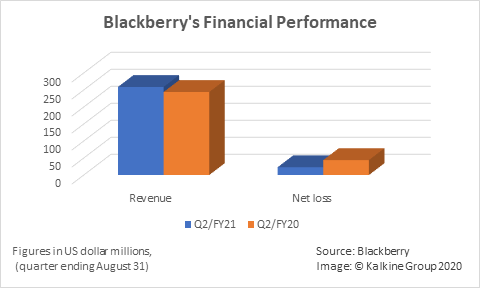 The increase in revenue was driven by BlackBerry QNX tech’s expansion in autonomous vehicle systems and BlackBerry Spark Suites business gains, which included clients like the US Air Force, the Royal Canadian Mint, UK's Ministry of Defence, Rolls Royce and Lloyds Bank.

The scrips are currently trading at C$ 6.17.

Absolute stocks have gained nearly 83 per cent this year, riding on the market’s tech stock rally amid the pandemic. In the last six months, this cybersecurity stocks have climbed 76 per cent and up 14 per cent in the last three months. The scrips are trading flat over one-month period.

In its fiscal 2020 fourth quarter results (ending June 30, 2020), the company posted revenue of US$ 27.2 million, up eight per cent year-over-year. Net income grew nine per cent YoY to US$ 2.2 million. It ended the quarter with US$ 11.6 million cash from operating activities.

But the buck doesn’t stop at cyber resilience.

To uncover the hidden virtual threats and reduce data breaches, more investments should be directed at the cybersecurity space. Investors are likely to fund entities dealing with next-generation firewalls to Security Orchestration Automation and Response (SOAR) and other innovative trends in cybersecurity ecosystem.