Technology stocks underwent a massive selfoff earlier this month, on October 4, as fear of rising inflation gripped the market.

By the next trading session, however, tech stocks rebounded quickly, with the TSX tech sector gaining 0.25 per cent on October 5 and firms Shopify Inc (TSX:SHOP) and Nuvei Corp (TSX:NVEI) rising by one and five per cent, respectively.

On Wednesday, October 13, the S&P/TSX Capped Information Technology Index noted a growth of nearly 17.23 per cent on a year-to-date (YTD) basis.

Taking note of the gaining spree, let’s look at the recent performance of some Canadian tech shares.

This Canadian tech juggernaut’s share prices have skyrocketed by about 2,900 per in the past five years, mirroring its growth in the ecommerce universe where it provides subscription and merchant solutions to small and midsize businesses.

SHOP stock has also surged by about 18 per cent so far this year and gained roughly 20 per cent YTD.

3 Canadian tech stocks to beef up your portfolio

Having witnessed a stock price growth in multifold over the past few years, Shopify may seem like an expensive option to some investors. What does play in its favor, however, is the argument that Shopify Inc is a strong contender in its industry, holding a market share of some 29 per cent in the US alone. Hence, holding its stock could draw in gains in the long run.

The Canadian player also posted a significant price-to-earnings (P/E) ratio of 67.9 as on October 13, while its return on equity (ROE) stood at 32.69 per cent. 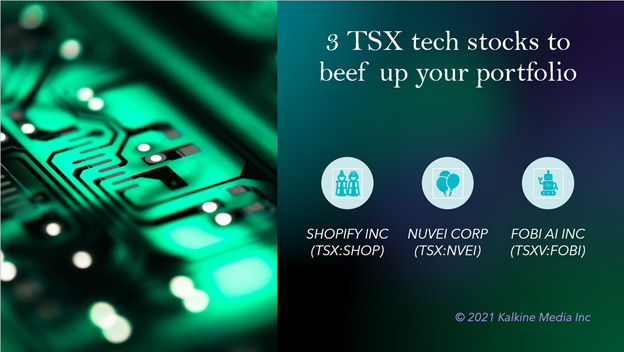 Stocks of the fintech player, which offers digital payment services across Canada, the US, European Union, the UK, etc, have grown by a significant 200 per cent this year.

NVEI scrips also posted a return of 85 per cent in the last six months, as on October 13.

Nuvei Corporation drew investor attention this month after it announced its plans to go public in the US.

The Montreal-headquartered firm has been trading on the Toronto Stock Exchange (TSX) for more than a year now, after having raised C$ 700 million in its Canadian initial public offering (IPO) last year.

Now, the company is aiming for a US IPO where it will put 1.5 million of its shares up for sale to find a spot on the Nasdaq Stock Market. Here, it is expected to trade under the same name of ‘NVEI’.

Also read: Nuvei IPO: How to buy the Canadian fintech stock as it plans US debut?

Nuvei, as of June 30 this year, reserved cash of US$ 533.7 million, which was significantly up from that of US$ 180.7 million in December-end 2020. The company is also expanding significantly, making it one of few tech players to watch out for.

In September-end, Fobi AI said that it is purchasing online coupon platform Qples Inc in a deal comprising C$ 3.2 million and up to an additional C$ 1 million earn-out.

Stock price-wise, the AI firm saw its scrips soar by more than 58 per cent in past six months, while scoring a YTD growth of 18.5 per cent.

The COVID-19 pandemic had seen the tech sector witness quite a bit of surge in sales last year as more people relied on technology to get through day-to-day life while locked indoors.

Now, as the world is slowly getting back up on its feet amid increased vaccine drives, this increased reliance on tech services could decrease as people return to the streets and brick-and-mortar stores.

However, technology is something that is only going to evolve further and entrench deeper into the daily lives of people. And while the open roads have their charm, so does the option of ordering groceries from the comforts of your couch.

Hence, as the demand for such online services grows, tech stocks are likely to expand over the years as well.