Canada is one of the largest oil and gas suppliers worldwide. As the country is focused on achieving its net-zero emission target, the S&P/TSX Capped Energy index continued to shoot up by over 16 per cent year-to-date (YTD).

Let us look at the two TSX-listed energy stocks.

The C$ 105 billion market cap midstream energy company, Enbridge Inc, is one of the most actively traded companies on the TSX, noting a daily trade volume of 9.9 million as on Friday, January 14.

Enbridge Inc generated net earnings of C$ 682 million in Q3 FY2021 compared to that of C$ 990 million a year ago, as per Generally Accepted Accounting Principles (GAAP).

Enbridge, which had a price-to-earnings (P/E) ratio of 18.40, saw its stock close at C$ 52.30 apiece on Friday, January 14. The energy infrastructure scrip jumped by over 16 per cent in the past one year.

Vermillion Energy is one of the top energy companies, with a daily trading volume of 2.5 million as of January 14.

In November 2021, the company announced it was acquiring Equinor Energy Ireland Limited, which has a 36.5 per cent ownership interest in Corrib, to expand its reserves and production capacity, strategically.

The Calgary-based energy producer, which has a return on equity of 56.19 per cent, reported funds flow from operations of C$ 263 million in Q3 FY2021, representing a year-over-year (YoY) surge of 52 per cent mainly due to an increase in commodity prices. 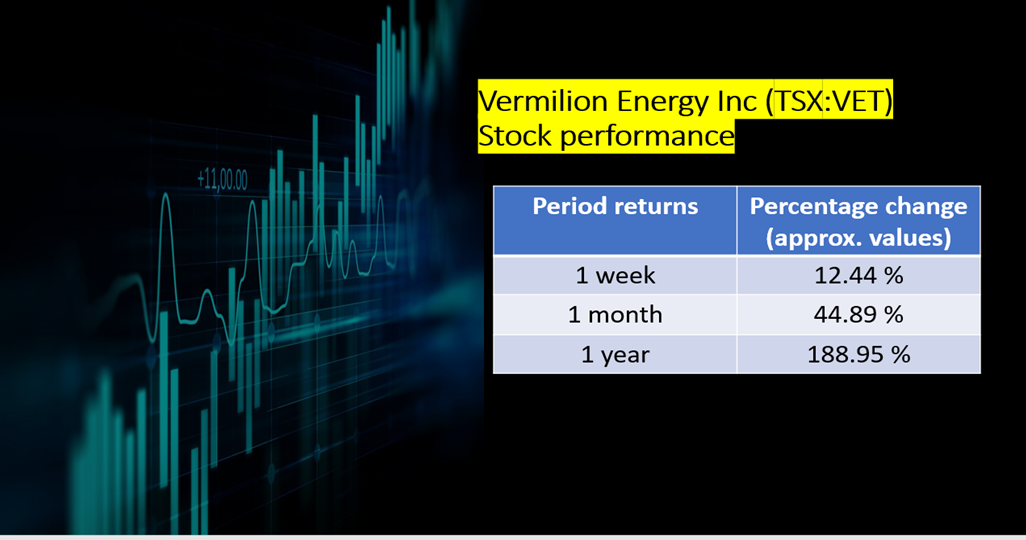 Stocks of Vermilion galloped by nearly 189 per cent in the last one year. The oil and gas scrip closed at C$ 19.88 apiece on January 14.

Energy companies, specifically those involved in the oil and gas business, may continue to profit from the limitations of the emerging renewable and clean energy industry for now. However, investors should track new developments and market trends to capitalize on significant gains and act in a timely manner to mitigate losses.