Where is Pi Network crypto project heading? All you must know

Canopy Growth Corporation (TSX: WEED) has been triggering some investor interest recently, despite a fall in its stock price.

The pot maker is engaged in the business of cultivating, producing, and selling cannabis and hemp products for medical and recreational use. The Smith Falls-headquartered company offers a wide variety of cannabis-based solutions like flowers, edibles, vapes, beverages etc.

Let us find out more about the Canadian pot maker.

The cannabis producer’s scrip clocked a 52-week low of C$ 10.18 earlier this month, on January 6, although it is presently up by almost 10 per cent from this low.

The pot maker earned a net revenue of C$ 131 million in the second quarter of fiscal 2022, noting a year-over-year (YoY) decrease of three per cent.

The cannabis company also reported a net loss of C$ 16 million in the latest quarter, which improved C$ 80 million from the same quarter a year ago.

Canopy Growth saw its adjusted EBITDA fall by C$ 77 million YoY in the latest quarter to C$ 163 million, mainly due to low sales. 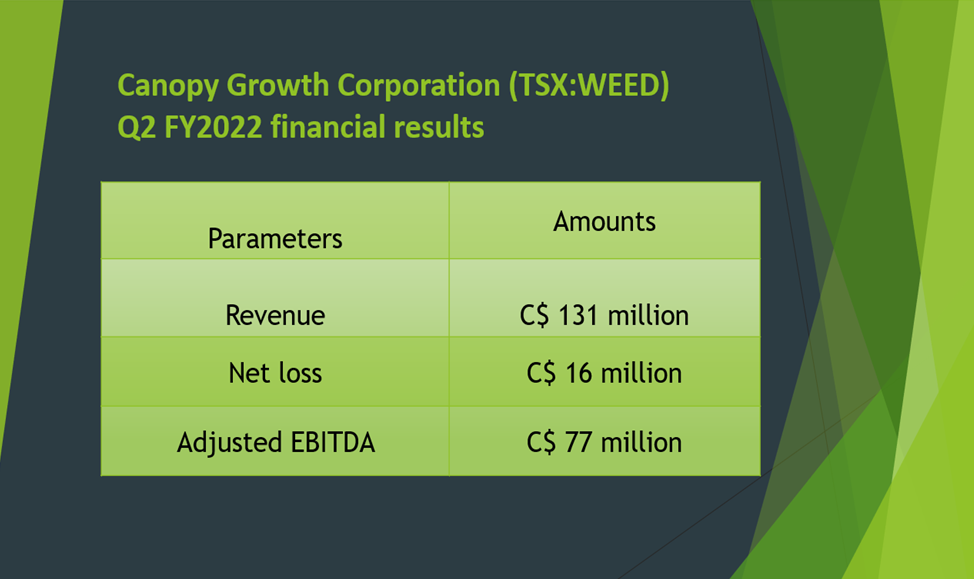 In its free cash flow, the Ontario-based cannabis manufacturer and seller posted an outflow of C$ 101 million in Q2 FY2022, down by 47 per cent YoY.

Canopy Growth had cash and short-term investments of C$ 2 billion at the end of the second quarter of FY2022.

Canopy Growth has said that it is focused on revenue improvement, specifically by promoting its recreational cannabis business. The company has already increased the supply of its THC flower products, which is in demand. In addition, it has also launched new products to improve and strengthen its market share.

If the market conditions improve, Canopy Growth can see a betterment of its performance going forward. However, investors should ideally conduct proper research before any investments.

Also read: Are these unique ocean energy stocks under $6 too cheap to ignore?