The Covid-19 pandemic has taken the industries by storm, but there is one valuable energy commodity that is battling the rough weathers quite well – lithium, which is integrated into almost every corner of our lives. The world is seeing a massive shift towards clean technology and green energy sources to generate and store energy. As demand for electric vehicles soar, it may drive growth in the lithium-ion battery market globally as well. Piedmont Lithium (NASDAQ:US or PLL:US) and Lithium Americas Corp (LAC:TSX) are two of the trending lithium stocks this week, as per the TSX.

While lithium is not a rare commodity the process of extraction of this metal is rather difficult. The recyclable advantage offered by the metal and comparatively less pollution hazards caused are some of the quintessential reasons why lithium is preferred over other alternative sources for future technological developments.

Piedmont Lithium Limited owns the Piedmont Lithium project in Carolina’s TinSpodumene Belt (TSB), at approximately 25 miles west of Charlotte, North Carolina. It is one of the largest lithium regions in the world.

The company has a current market capitalization of US$ 545.30 million. Recently the company and Tesla Inc (NASDAQ: TSLA) entered a five-year contract on September 28. The shares of PLL skyrocketed 236 per cent post the deal. Tesla’s CEO Elon Musk had announced plans to increase its battery capacity on future projects, at its Battery Day 2020 event.

As a part of the deal, Piedmont Lithium will supply about 160,000 tons per annum of its spodumene concentrate (SC6) from its North Carolina deposit to Tesla for initial five-years on a fixed price bidding purchase basis. Tesla’s deal boosted PLL’s stock performance with the scrips record a steep climb of over 418 per cent year-to-date.

The company stocks have been trading on a 10-day average volume of 9.72 million shares. Its current profit-to-book ratio (P/B) is 4284, as per data on the TSX. However, the company has negative returns on equity and assets. 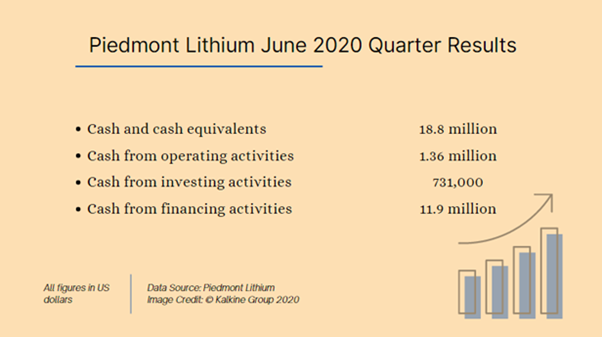 Lithium Americas Corp is a Canadian company developing the Caucharí-Olaroz lithium brine project in Jujuy, Argentina. The company is also working on the Thacker Pass lithium claystone project in Nevada.

The Caucharí-Olaroz lithium project is currently being developed by Minera Exar, which is a joint venture of Ganfeng Lithium and Lithium Americas.

The company also owns a facility in Reno, Nevada, where operations have resumed.

More than 15,000 kg of high-quality lithium sulphate is produced at this process testing facility. The company is exploring financing options and possibility of joint-venture partnerships for the Thacker pass construction, which is underway.

The stock has gained over 371 per cent this year.

The company had nearly US$ 50 million in cash and cash equivalents at the end of second quarter 2020 ending 30 June 2020, down from US$ 83 million in 2019. The company withdrew US$ 96 million from the US$ 205 million senior credit facility and US$ 22 million from its US$ 100million subordinated loan facility, which resulted in increase of total long-term liabilities.

Net loss for the three months ended June 30, 2020 was nearly US$ 6 million, down from US$ 6.7 million from the same quarter last year.