Stocks of Neighbourly Pharmacy Inc. (TSX:NBLY) gained momentum at market opening on Tuesday, October 26, as the healthcare company announced results for the second quarter of the fiscal year 2022.

Neighbourly has emerged as one of the largest pharmaceutical companies in Canada and has a rapidly growing network of independent pharmacies.

Chris Gardner, chief executive officer at Neighbourly, said that the strong quarterly results were due to the company's strategy of acquisition and integration.

The company said that 95 per cent of the quarterly revenue growth was due to the addition of pharmacies and is looking to acquire pharmacies in the future. In the last 12 months, Neighbourly added 51 pharmacies to its network.

Should you invest in Neighbourly Pharmacy (TSX:NBLY)?

Before announcing the financial results, Neighbourly Pharmacy announced that it is into an expansion mode and has entered into an agreement to acquire five pharmacies in Western Canada at a purchase price of C$ 21 million.

Earlier in October 2021, the healthcare company had announced the acquisition and integration of 21 pharmacies. 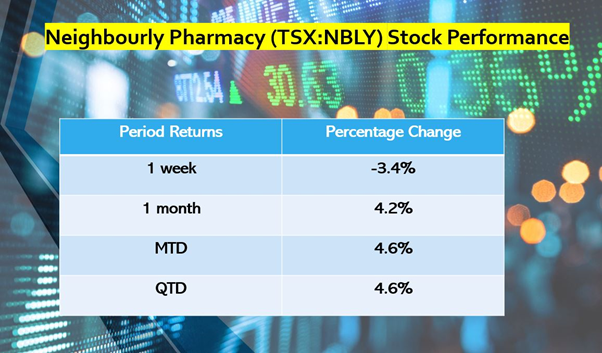 Including five more pharmacies, Neighbourly is looking to expand its network to 172 pharmacies.

Recently, Neighbourly Pharmacy completed a treasury offering of common shares worth C$ 30 million, and it could give greater financial flexibility to the company to pursue more acquisitions in future.

Canada has 3,600 independent pharmacies, and acquisition opportunities remain abundant in the country.

In Q2 2022, Neighbourly Pharmacy's adjusted EBITDA increased by 51.5 per cent YoY to C$ 10 million, and this was majorly due to the profitability of pharmacies added to the company's network.

The net loss for the second quarter of fiscal 2022 was C$ 3.4 million, reflecting an improvement of C$ 0.5 million.