At the time of writing this, KDMN stocks were trading at a value of US$ 9.15 per piece, noting a surge of nearly 73 per cent from its previous day’s closing stock price of US$ 5.3.

What triggered such a rise for Kadmon Holdings stocks on Wednesday? Let’s find out.

On Wednesday morning, French pharmaceutical company Sanofi (NASDAQ:SNY, SNY:US) announced that it is set to acquire Kadmon Holdings in a move to further strengthen the expansion of its transplant business.

Kadmon stocks seem to have pulled investor attention in the wake of this acquisition announcement.

Also read: Penn Gaming to acquire Score Media (TSX:SCR) for $2B, stock up 75% 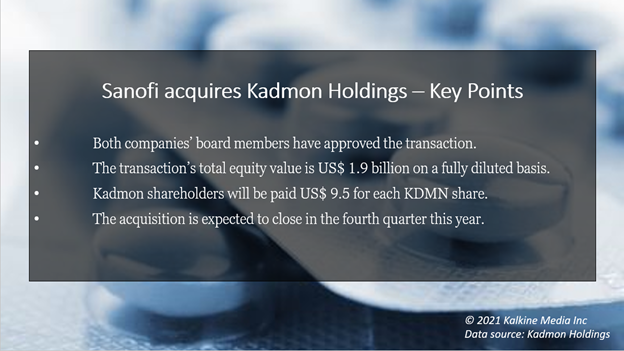 The boards of directors of both Sanofi and Kadmon are said to have collectively greenlit the transaction, which will see a total equity value of about US$ 1.9 billion on a fully diluted basis.

The companies’ official statement further added that Kadmon shareholders will be paid a cash value of US$ 9.5 for each KDMN share they hold.

Sanofi, which recently bought another biotechnology firm named Translate Bio for US$ 3.2 billion, said that Kadmon’s acquisition will help its plans to further grow its General Medicines core assets.

While Kadmon’s stocks surged, Sanofi’s NASDAQ-listed shares were down by about three per cent on Wednesday morning (11:14AM EST).

Kadmon Holdings’ stocks grew by nearly 129 per cent in the past year. More recently, the biotech stock has surged by almost 137 per cent this quarter, and grown more than 75 per cent this week.

Now heading for a merger with Sanofi, the US-based company’s acquisition is expected to close in the fourth quarter this year.