How to buy Medicago stock as its vaccine shows 71% efficacy?

Canadian drugmaker Medicago announced on Tuesday, December 7, that its plant-based vaccine for coronavirus has shown effectiveness against the virus.

The vaccine was made in collaboration with GlaxoSmithKline Plc (NYSE:GSK) and it has demonstrated 71 per cent efficacy against multiple variants of the coronavirus.

In addition, the vaccine makers observed that their vaccine showed 75 per cent efficacy against the Delta variant and 89 per cent against the gamma variant, which was first identified in Brazil.

How to buy Medicago stock as its vaccine shows 71% efficacy

The study was conducted on 24,000 people and no vaccinated participants developed serious side effects or severe disease. After the announcement, investors are searching for the Medicago stock as the vaccine efficacy is a big development.

Can you buy the Medicago stock?

You cannot buy the Medicago stock in Canada as it does not trade on the Toronto Stock Exchange (TSX). In 2013, the shares of the company were delisted from the TSX as Tokyo-based Mitsubishi Chemical Holdings bought Medicago for $357 million. 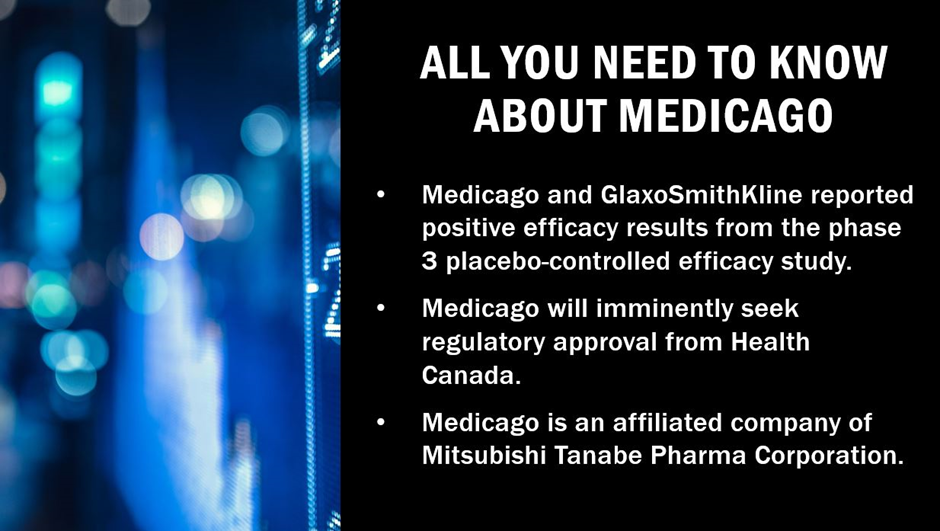 If investors want to invest in Medicago, then there's an alternate option of investing in Mitsubishi Chemical. However, the stock of this company is available on the Tokyo Stock Exchange and trades under the stock symbol 4188.

Interested investors will have to find a trading account of a brokerage company that deals in international stocks. The 4188 stock jumped 1.3 per cent during the trading session on December 7 and closed at 858 JPY.

Meanwhile, the New York Stock Exchange-listed GSK stock has climbed around one per cent during pre-market hours.

The study results did not include the recently identified omicron variant and Medicago is planning to test the vaccine against the strain.

Both the companies have begun the process to seek approval from the regulatory authorities in the US, Canada, the United Kingdom, and other countries.