The Canadian government has been pushing for environment-friendly renewable energy alternatives since it came to power in 2015. Canada currently generates about 16 per cent of its total primary energy supply from renewable energy sources such as solar, ocean, hydropower, wind, biomass, etc. In fact, solar and wind energy are the ‘fastest growing sources of electricity’ in the country at the moment, according to the Natural Resources Canada (NRCan).

The initiative isn’t a new one. Canada set up the Renewable Energy Deployment Initiative (REDI) at a federal level back in 1998. Under REDI, NRCan began coaxing private and public sectors to use renewable energy sources over the years.

At the moment, Canada gets its maximum renewable energy (as much as 67.5 per cent) from hydropower. Solid biomass, which comprises energy from wood, waste, etc., is second with 23.3 per cent. NRCan says wind power too has been “growing steadily” over the last decade. 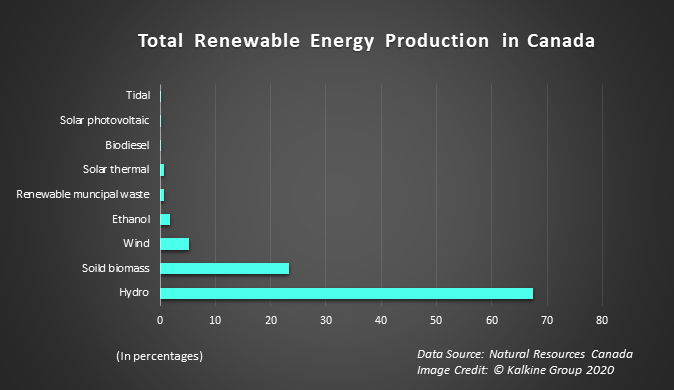 Canada’s GHG Emissions Down Only 2% in About 14 Years

The Canadian Center for Policy Alternatives (CCPA) pointed in a report last year that even if new federal policies are implemented to ramp up the reduction of greenhouse gas (GHG) emissions, Canada is still likely to miss its 2020 and 2030 targets.

It added that following a three-year decline, the country’s GHG emissions climbed by one per cent in 2017 to 716 Mt total.

The 2019 report also claimed that since 2005, Canada has recorded a paltry two per cent fall in its GHG emissions.

3 Renewable Energy Stocks to Look at

Even so, companies delving in renewable energy production have left a mark on the Canadian stock markets this year. The S&P/TSX Renewable Energy and Clean Technology Index reflects a growth of over 38 per cent year-to-date (YTD), while the S&P Global Clean Energy Index rose over 77 per cent this year.

Canadian Solar Inc (NASDAQ: CSIQ) is one of the renewable energy stocks that have recorded growth in this year of coronavirus pandemic. The company deals in large scale solar projects and primarily manufactures solar photo-voltaic (PV) modules and saw a nearly 69 per cent increase in its stock price this year. While many natural gas and oil companies suffered major setbacks amid the COVID-19 outbreak, Canadian Solar stocks climbed 121 per cent in the last six months.

Brookfield Renewable Partners (TSX: BEP.UN) invested in renewable energy assets and has a portfolio of over 5,300 facilities across Europe, Asia, North and South America. Its shares grew over 20 per cent in value this year and nearly 13 per cent in the last six months.

When the markets nearly bottomed out amid the pandemic back in March, Brookfield Renewable Partners stock plummeted to a low of C$ 46.93 (March 23) to registered a decline of nearly 37 per cent in the span of a month between February and March. However, its scrips recovered nearly 52 per cent in the following seven months.

Brookfield Renewable Partners generated funds worth C$ 232 million from its operations in the second quarter ending 30 June 2020, up one per cent year-over-year (YoY). Its revenues of C$ 651 million, however, showed a decrease of C$ 136 million YoY. The company’s liquidity stood at C$ 3.4 billion at the end of June 2020. It currently has a stock price of C$ 71.11.

Shares of Northland Power Inc (TSX: NPI) are currently trending on the Toronto Stock Exchange among the top price gaining stocks. Since plunging to a low of C$ 20.67 on March 23 amid the market crash, its scrips have made a significant rebound of 116 per cent in about seven months’ time.

Northland Power Inc stocks, currently valued at C$ 44.68, are up 65 per cent this year and about 55 per cent in the last six months.

As of June 2020, Northland Power Inc had cash and liquidity worth C$ 561 million.

In its Q2 2020 report, the company said that it expects its adjusted EBITDA to remain between C$ 1.1 billion to C$ 1.2 billion and its free cash flow per share to stay in the range of C$ 1.70 to C$ 2.05 this year. How much of its outlook stands true will be revealed when Northland Power posts its 2020 third quarter results on November 10.

The Renewable Energy Sector of Canada

The Canadian government announced an infrastructure investment plan worth C$ 10 billion earlier in October, a quarter of which was carved out for clean power initiatives. And on Thursday, October 15, Alberta's first utility-scale energy storage project ‘WindCharger’ began its commercial operations.

Canada’s renewable energy sector is bubbling with federal initiatives and business indulgence. However, the market is still at a growing stage and susceptible to fluctuations. Hence, the possibility that what may be soaring now, may not be in flight in future (and vice versa) should be taken into account.