Canadian government plans to ban single-use plastic items such as checkout bags and takeout container and cutlery by 2021-end. These items make up most of the litter in the nation’s lakes, rivers and oceans. Under these circumstances, cleantech stocks such as Innergex Renewable Energy Inc. (TSX:INE) and TransAlta Renewables Inc. (TSX:RNW) have been gaining traction.

The ban will not affect medical items and personal protective equipment (PPE), made from single-use plastic, Environment Minister Jonathan Wilkinson informed. The government, however, has emphasized on proper disposal of PPE kits such as innovative recycling and solutions.

Call to Clean Up Plastic Mess in Canada

Every year, Canadians throw away non-recyclable plastics worth C$8 billion. Up to 15 billion plastic bags are used and 640,000 tons of discarded fishing gear are thrown into the oceans annually, says official government data.

In the last 25 years, the Great Canadian Shoreline Cleanup program supported by the federal government helped remove over 1.3 million kilograms of single-use plastic trash from the country’s shores.

With companies treading the environmental consciousness and sustainability route, investors are equally conscious about investing in environmental, social, and corporate governance (ESG) stocks. The focus is now slowly shifting to the “triple bottom line” – the impact on finance, environment, and the society at large.

Keeping that in mind, here are two cleantech stocks in focus:

Renewable power producer Innergex owns and operates hydroelectric, wind and solar energy assets in Canada. Hydroelectric facilities account for most of power generated by the company.

The company recently entered into two 25-year long power-purchase agreements with Hawaiian Electric Company, Inc for solar and battery energy storage projects, which will be operational by 2023. The company also has presence in Chile, France, and the United States.

The company has a current market capitalization of C$ 4.5 billion. Innergex stocks have surged by over 55 per cent year-to-date, from C$16.86 to the current C$25.99. The scrips have gained nearly 33 per cent in the last six-month period and up 35.71 per cent in the three months. 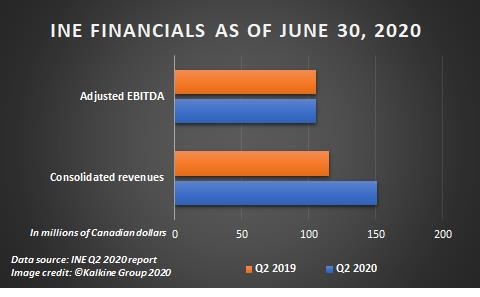 The company distributed a monthly dividend of C$ 0.078 and at currently yields of 5.27 per cent. TSX data shows positive dividend growth rate over the three-year and five-year period at 1.75 and 2.87, respectively.

Renewable energy production of the company increased to 1098 GWh in the second quarter of 2020 from 867 GWh a year ago.

The cash flow from operating activities is C$52 million in Q2 2019 as compared to C$71 million in Q2 2020. The company ended the quarter with cash and cash equivalents of C$29 million and liquidity of C$498 million.