Canada’s main equity index plummeted by 187.59 points to 19,505.33 on Tuesday, August 2, after recording triple-digit gains for three straight sessions. These market fluctuations can be daunting for investors seeking growth exposure as such investments involve high risk.

Focus on long-term growth could be a less complex way for such investors to tackle the current market volatility. Hence, here’s a list of 10 Canadian growth stocks by Kalkine Media that one can explore amid economic turmoil.

The CAE stock spiked by almost nine per cent in three months. According to Refinitiv, CAE stocks had a Relative Strength Index (RSI) value of 59.32 (moderate trend) on August 2.

Software provider BlackBerry received conformance certification for Future Airborne Capability Environment (FACETM) that would enable aerospace and defense manufacturers and developers to deploy cost-effective defense capabilities. BlackBerry stocks surged by 3.3 per cent to close at C$ 8.13 on August 2, in the light of this new FACE accreditation.

The BB stock climbed by over 17 per cent quarter-to-date (QTD). As per Refinitiv findings, BB stocks appeared to be on a moderate momentum with a rising RSI value of 60.8, supported by a trading volume of 1.71 million, on August 2. 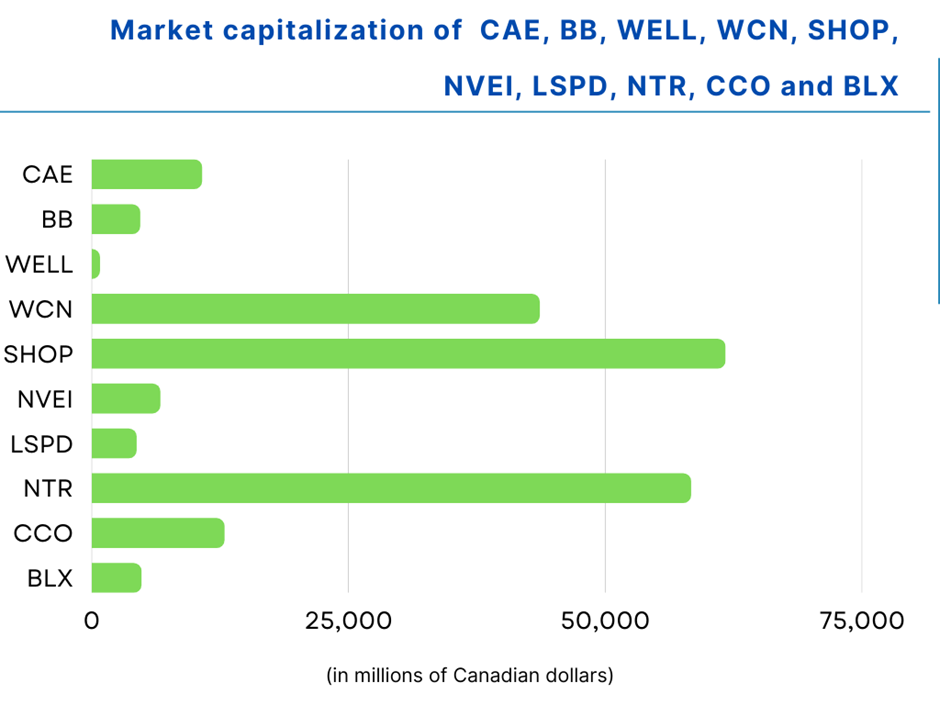 Well Health revealed that omnichannel patient visits grew by 50 per cent year-over-year (YoY) to 839,698 in the second quarter of 2022. While reporting pre-liminary financial results, the small-cap health company said that it projects revenue to surpass C$ 130 million in Q2 2022. As for its stock performance, the WELL stock climbed more than 13 per cent in a month. According to Refinitiv data, WELL stocks saw an RSI value of 56.81 on August 2.

Waste Connection is a large-cap waste management company offering solid waste and recycling solutions across North America. The Toronto-based industrial company anticipates its 2022 revenue to reach US$ 7.12 billion, higher than the original revenue guidance of US$ 6.87 billion. Waste Connection will also distribute a quarterly dividend of US$ 0.23 on September 1.

The WCN stock zoomed by over seven per cent in 12 months. As per Refinitiv findings, WCN stocks recorded an RSI value of 64.86 on August 2, marginally down from the overbought mark of 70.

Canada’s e-commerce infrastructure company Shopify expanded its fulfilment network by acquiring Deliverr for a transactional value of about US$ 2.1 billion. The software company said its total revenue swelled by 16 per cent YoY to US$ 1.29 billion in the second quarter of fiscal 2022.

The SHOP scrip gained by over 19 per cent in the last week. Shopify stocks recorded an RSI value of 55.06 on August 2, with 4.05 million shares-exchanging hands, as per Refinitiv.

Nuvei is a financial technology company with a market capitalization of C$ 6.65 billion. On August 2, the fintech firm announced to offer payment services to Selina, a global hospitality brand, in Europe and Israel under a partnership agreement. The Canadian company also revealed that these payment services to Selina would soon be available in other geographies, with additional alternative payment methods in the pipeline to be delivered this year.

The NVEI stock dipped by over 43 per cent in 2022. According to Refinitiv, NVEI stocks saw an RSI value of 51.28 on August 2, reflecting moderate momentum.

The LSPD stock swelled by about 26 per cent last week. According to Refinitiv information, LSPD stocks held an RSI value of 57.1 on August 2.

Nutrien is focused on expanding its retail footprints in Brazil and on July 20, agreed to buy Brazil-based agriculture solution provider Casa do Adubo. The large-cap fertilizer company stated that if approved and completed, this acquisition is projected to boost its run-rate sales by US$ 400 million, taking its Ag solutions annual sales to about US$ 2.2 billion in Latin America.

Uranium producer Cameco said its net profit notably improved to C$ 84 million in Q2 2022, higher than a loss of C$ 37 million a year ago. This increase in profits came as its latest quarter’s revenue jumped by 55 per cent YoY to C$ 558 million. The CCO stock galloped by almost 46 per cent in 52 weeks. As per Refinitiv information, CCO stocks held an RSI value of 62.12 on August 2, with 1.1 million share switching hands.

Boralex is a mid-cap firm engaged in producing electricity. The utility company develops, constructs and manages renewable power stations and sells to customers across the US, Canada and France. The BLX stock grew by over 42 per cent in six months. As per Refinitiv, BLC stocks held a high RSI value of 72.93 on August 2, signalling high momentum.

The TSX Composite Index lost about eight per cent this year as economic pressure continues to affect market sentiments. However, investors can consider the TSX growth stocks mentioned above to unlock significant gains from long-term growth exposure.