The TSX benchmark index, which had been falling for the consecutive five-session, rose by 128.13 points to 19,270.85 at market close on Friday, September 2, primarily supported by a rally in yellow metal stocks. Generally speaking, gold stocks are known among investors as an equity alternative to widening their exposure to the gold commodity.

Gold prices were US$ 1,712.9 per troy ounce on September 6, reflecting a drop of 0.6 per cent. Market dynamics in the near term may continue to be volatile as investors await the Bank of Canada's interest rate decision. However, cheap gold stocks could be worth exploring despite the current environment.

On that note, let us discuss the following six gold stocks, picked by Kalkine Media®, that one can consider amid the current market environment.

Eldorado Gold reported increased gold production of 113,462 ounces in the second quarter of 2022, representing a year-over-year (YoY) rise of 22 per cent underpinned by 'strong' production and mine development at Lamaque. The small-cap firm sold 107,631 gold ounces at an average realized price of US$ 1,849 per ounce in the year's second quarter. Eldorado said its revenue reached US$ 213.4 million in Q2 2022 relative to US$ 233.2 million in Q2 2021.

Eldorado Gold stock rose by over eight per cent from a 52-week low of C$ 6.86 clocked on Thursday, September 1. As per Refinitiv findings, the ELD stock saw a Relative Strength Index (RSI) value of 44.2 on September 2, above the oversold level of 30, representing a moderate market situation.

New Gold is a Toronto-based gold miner having a market capitalization of C$ 593.6 million. The company said it produced 70,154 ounces of gold equivalents in Q2 2022.

New Gold stock also shot up by about seven per cent from a 52-week low of C$ 0.61 hit on September 1. According to Refinitiv data, the NGD stock's RSI value was 37.01 on September 2, which was marginally above the bearish level of 30.

B2Gold said its total gold production amounted to 223,623 ounces in Q2 2022, denoting a six per cent increase from Q2 2021. The mid-cap company posted a gold revenue of US$ 381.98 million in the second quarter this year, more than C$ 362.99 million posted in the previous year's second quarter. Apart from this, B2Gold Corp also pays its equity holders a dividend (presently, C$ 0.04).

B2Gold stock increased by over eight per cent from a 52-week low of C$ 3.83 on September 1. Based on Refinitiv findings, the BTO stock had an RSI value of 44.73 on Friday, September 2. 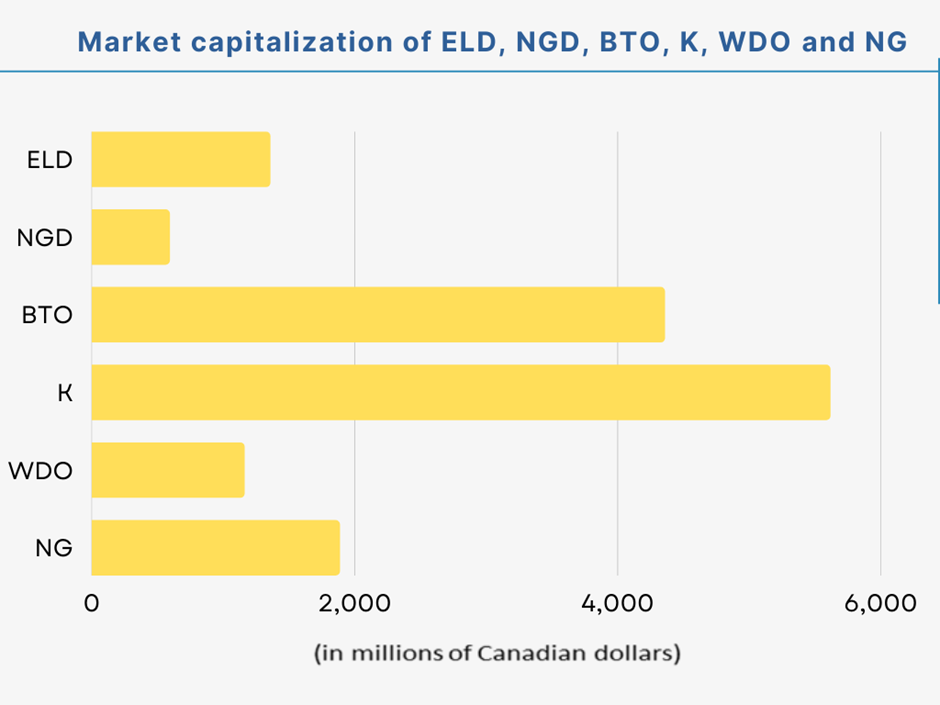 The small-cap gold resource miner saw its scrip climb nearly nine per cent from a 52-week low of C$ 7.56 on September 1. As per data from Refinitiv, the WDO stock held an RSI value of 37.5 on September 2.

Kinross Gold stock rose by over three per cent month-to-date (MTD). The K stock edged higher by over 13 per cent from a 52-week low of C$ 3.91 (reached on July 15). As per the information from Refinitiv, the K stock possessed an RSI value of 49.81 on September 2, up from the bearish level of 30 but down from a bullish level of 70, which seems to signal moderate condition.

NovaGold Resources is a C$ 1.88 billion market capitalization firm focused on exploring and advancing gold projects. The small-cap company reported cash and term deposits of US$ 142.29 million as of May 31 this year compared to US$ 169.12 million posted as of November 30 last year.

The company revealed that additional funds worth US$ 25 million from Newmont Corporation are due in July 2023, which could be 'sufficient' enough to advance Donlin Gold.

NovaGold Resources stock shot up by over eight per cent from a 52-week low of C$ 4.06 clocked on September 1. As per Refinitiv data, the NG stock had an RSI value of 40.58 on September 2.

With inflationary pressure on the focus, the central bank may continue to increase interest rates, thereby causing recession worries and affecting investment sentiments. However, gold stocks could expand investors' exposure to the yellow metal to weather such economic uncertainties.