The Global Consumer Confidence Index tumbled to 47.6 points in May 2022, according to the Ipsos survey results dated May 19, 2022. This index is calculated by finding the average of all the national indexes of the countries involved in the survey.

This survey was taken from April 22 to May 6 and included feedback from over 17,000 adults aged under 75 from 23 countries (including Canada). According to the data, though Canada's National Index remained above the 50-point mark at 50.8 in May, consumer confidence is down 1.5 points since the pre-pandemic level.

It would seem that rising inflation, the Ukraine crisis and COVID-19 disruptions continue to hurt consumers' sentiments worldwide. In such scenarios, the stocks of quality TSX companies, like banks, may be an option to look at. So, here are three TSX bank stocks that investors can explore.

Royal Bank of Canada recently unveiled a technology that will allow its customers to authenticate themselves through its mobile app by using their personal PIN with their client card (for Android) or biometrics (for iOS).

Divided yield, which expresses the company's annual dividend as a per cent of its current stock price, was almost four per cent for Royal Bank.

Its return on equity (ROE) was over 18 per cent (highest in this list). ROE represents the company's financial performance measured by comparing its net income to shareholders' equity.

The RY stock has swelled by approximately three per cent in the last year. RY's Relative Strength Index (RSI) value was at 38.56, under 10 per cent above the generally held oversold mark of 30, on May 20, as per Refinitiv findings.

Bank of Nova Scotia has a dividend yield of nearly five per cent. The lender has a P/E ratio of 10. If the company holds a higher P/E ratio compared to its peers then it is considered overvalued and vice versa.

The BNS stock is up roughly two per cent in 12 months. According to Refinitiv data, BNS's RSI value stood at 34.61 on May 20.

Canadian Imperial Bank of Commerce received two client experience awards from the Digital Banker on May 6 this year for its research and customer feedback work to improve digital client services. The lender's ROE was about 16 per cent, and its P/E ratio was roughly 10. 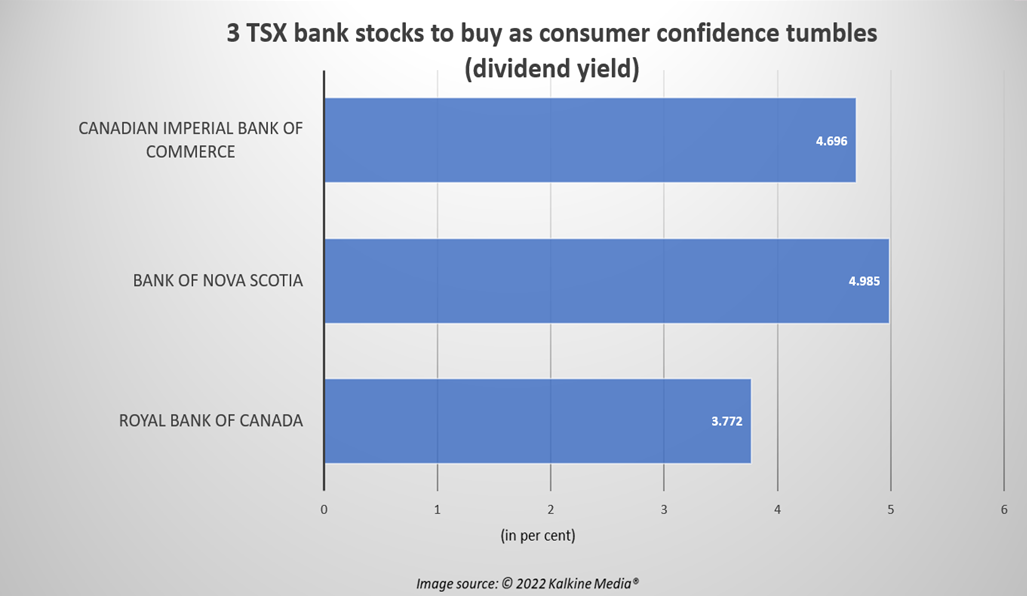 Canadian consumers seem to be losing confidence as the economy continues to face inflationary pressure and prospective rate hikes to combat it. However, TSX bank stocks might be an option that may provide long-term value but there are no guarantees in the stock market.