Stocks of cryptocurrency mining company Hut 8 Mining Corp (TSX:HUT) were ranked high on the trending charts on Tuesday, September 7. At opening bell, HUT stock was trading in the green territory at a value of C$ 13.6, up by roughly two per cent.

The crypto stock seems to have caught the attention of investors since late last week, having emerged as one of the most actively traded stock on the Toronto Stock Exchange on Friday.

Let us find out what is coaxing this surge for HUT stock.

On Thursday, Hut8 Mining announced in a corporate update that it mined about 326 Bitcoins in August 2021, bringing its average daily production to 10.5 Bitcoins. Its total BTC holdings stood at 4,450 Bitcoins by the end of the month.

The company, which claims to be among the top digital asset miners in North America, added that it expects the total cost per BTC to hover under the value of C$ 3,000. At the time of writing this, Bitcoin’s current price in Canadian dollars stood at about C$ 63,689.

Following the announcement of its August performance, the cryptocurrency miner’s stock shot up by as much as 17 per cent during its trading session last Thursday. 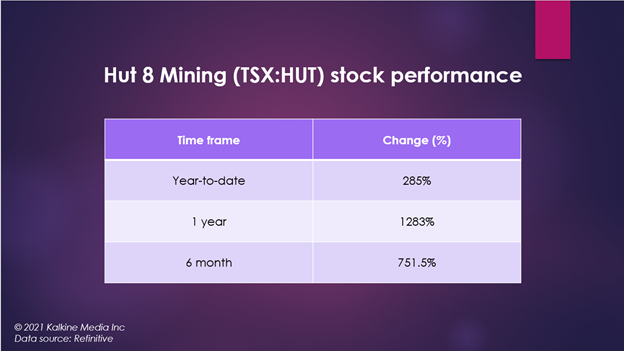 Hut 8 Mining ranks among the top financial scrips and overall price performers on the Toronto Stock Exchange (TSX), along with being one of the most actively traded stocks on the platform.

At the time of writing this, the crypto share was noting a year-to-date (YTD) surge of 285 per cent and a one-year growth of a whopping 1283 per cent.

As the crypto-verse continues to expand, Hut 8 could be a growing enterprise in the future.