Gala crypto's volume soars over 18,000%. What is its price prediction?

After gaining bullish momentum in the past few days, the Gala (GALA) token skyrocketed by 178 per cent in the last 24 hours and it was trading at US$ 0.05877 per token at 7 AM EST. Notably, the GALA coin also touched an all-time high on Monday, September 13, after it reached US$ 0.073974 per token, according to CoinGecko data. Its volume also soared over 18,000 per cent.

The sudden price hike has caught the attention of crypto investors in Canada as the Gala crypto topped the early morning trending charts in the country. Cryptocurrency enthusiasts may be looking to add this cryptocurrency to their portfolio out of fear of being left out.

What is Gala crypto and why is it surging?

The GALA coin is the native utility token of the Gala Games ecosystem, and it is based on the Ethereum blockchain as per the ERC-20 standard. Before getting into the GALA coin, let's understand more about Gala Games. This platform offers blockchain-based games to the users and gives them control over their games.

Within the Gala Games ecosystem, users can own their non-fungible tokens and influence the governance of games. According to CoinMarketCap, ever since its launch in 2019, the blockchain-based gaming platform has sold 26,000 NFTs, including an NFT which was valued at US$ 3 million and has 1.3 million monthly active users.

In the gaming ecosystem, GALA tokens can be transferred between users, and they have full control over how to use them. It can also be used to purchase things in a game.

The sudden surge in the GALA token price could be due to the announcement by Binance which said that it will open trading for the token on its platform. As Binance is of the largest cryptocurrency exchanges in this world, getting listed on that platform increases the credibility of a cryptocurrency as it is an uphill task. 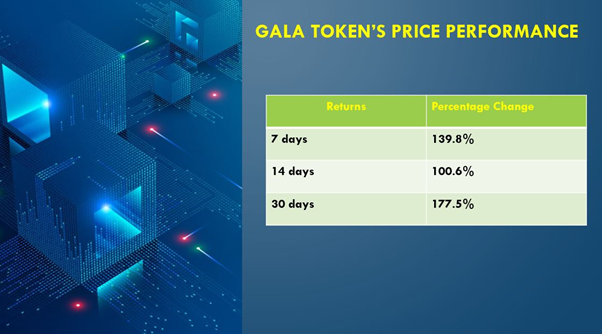 The present price movements indicate that the GALA token could witness a bullish momentum for the remainder of this year. The GALA coin could reach US$ 0.1 per token by the end of this year.

The gaming market is a growing sector and blockchain technology could influence the overall market. According to a Research and Markets report, the global gaming market is estimated to grow at a compound annual growth rate of 12 per cent between 2020 to 2024.

Also Read: What is Floki crypto and its price prediction after Elon Musk tweet?

The major contributors to the increasing size of the gaming industry will be the rise of e-sports and the integration of blockchain technology.