Nintendo Switch latest model is all set to hit the gaming market in October 2021 with an estimated sale price of US$350 per console. The company announced the OLED model will sport the latest technology with higher battery life and increased storage capacity. As to how this latest Switch model will gear up to add value is something we have to wait and watch.

Nintendo, the brand we all know

Nintendo Switch is an gaming console developed by the iconic brand, Nintendo Co., Ltd. It was first released worldwide in March 2017. The gaming console with wireless controllers can be accessed in both TV mode and can also be used as a portable playing device.

The company launched a revolution in the gaming space in the 1980s with classic games like Mario, Pokemon, and The Legend of Zelda. These were the first games designed and played on a TV screen and on a video game console. Nintendo video games were all a rage in the 80s and 90s decades, often offered as a Christmas gift. The company has dedicated fan base spread across the globe.

After introducing consoles like Nintendo 63 and Nintendo Wii, the company entered the domain of mobile games and gaming consoles. It has continued to make its presence felt in the gaming industry.

Nintendo Switch OLED model is all set to be available for sale from October this year. The new version will host features like an inbuilt storage capacity of 64GB, up from the current 32GB, better audio quality, an adjustable stand for better display.

The OLED model will come with new Nvidia chip and support 4K TV output. To better viewing experience and improved images, it will come with an increased 7-inche display size. Previous models only had a display size of 6.2 inches. The battery support is also to be better. 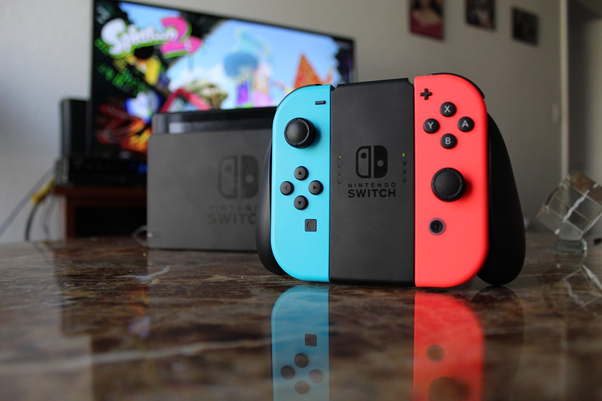 The stock delivered a three month return of 4.55 per cent and one-year return of 29.36 per cent.

Where to buy Nintendo stocks?

How can Canadian & American investors buy the stock

American and Canadian investors cannot directly purchase the shares of Nintendo since it is listed on the Tokyo and Osaka stock exchanges. Both investors need not worry. They can instead buy the stock in the form of an ADR.

There are two choices available. One, investors can purchase the ADR of the stock, which trades on OTC markets under the ticker symbol NTDOY.  In this case, one ADR is equivalent to 1/8th of the actual Nintendo share.

The second option is buying an equivalent ADR, which also trades on OTC markets with a ticker symbol (NTDOF). But in this scenario, one ADR is worth buying one share of Nintendo.