Royal Bank of Canada (TSX:RY) is gaining attention in the stock markets in the wake of its first-quarter results of fiscal 2022 being released on Thursday morning, February 24.

RBC, one of the big six banks in Canada, is a dividend aristocrat and is likely to benefit from increased borrowing costs. These two factors can contribute to it being among the most actively traded companies in the country amid the ongoing market volatility triggered by rising inflation.

Let us find out how RBC did in the first quarter of 2022.

The C$ 200-billion market cap bank saw its net profit reach C$ 4.09 billion in the latest earnings report, which was up by six per cent year-over-year (YoY). RBC’s diluted earnings per share also soared by seven per cent YoY to C$ 2.84 in Q1 FY2022.

The Toronto-based bank said that its pre-provision pre-tax earnings were C$ 5.5 billion in the latest quarter, up by 10 per cent YoY. Its total provision for credit losses (PCL) declined by 21 per cent YoY to C$ 105 million in Q1 FY2022.

The financial company also stated that its Common Equity Tier 1 (CET1) ratio dropped by 20 basis points (bps) to stand at 13.5 per cent as on January 31, 2022. This indicates that the growth in risk-weighted assets (excluding foreign exchange) and buybacks were partly offset by “internal capital generation”, said the bank.

PCL on performing loans increased by 18 per cent YoY while PCL on impaired loans declined by 17 per cent YoY during Q1 FY2022.

Royal Bank also announced a quarterly dividend of C$ 1.20 per common share to shareholders of record on April 25, to be paid on and after May 24. 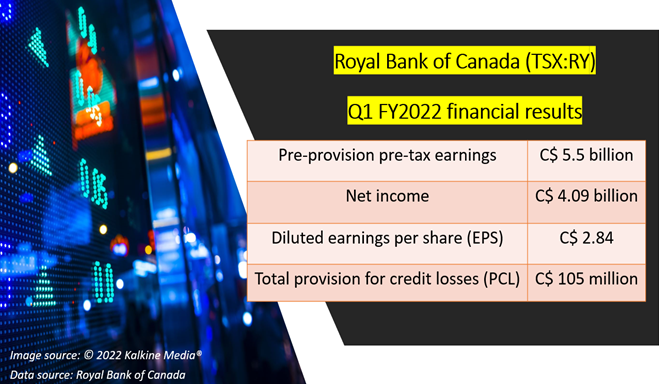 Stocks of RBC capitulated a return of over 25 per cent in the past 12 months. The bank stock closed at C$ 140.49 apiece on Wednesday, February 23, with 3.8 million shares switching hands during the session.

Royal Bank of Canada can see positive growth in its revenue if the central bank rules on substantial interest rate hikes to curb inflation. However, investors note the macroeconomic factors and the ongoing market sentiments while taking any investment decisions.