Stocks of Aurora Cannabis (TSX:ACB) jumped seven per cent on Monday, September 27, and closed at C$ 8.08 per share. The surge in share prices came despite a mild fall in revenues in the fourth quarter of fiscal 2021.

Around 1.5 million ACB shares traded hands on the Toronto Stock Exchange on September 27.

Why did Aurora Cannabis (TSX:ACB) surge?

A September 27 surge in cannabis stocks could be due to speculations that the House of Representatives in the United State of America could vote to legalize marijuana at the federal level.

As part of the 2022 National Defense Authorization Act last week, the House of Representatives had passed the SAFE Banking Act and this could be another factor why investors are focusing on marijuana stocks, including the ACB stock.

The Secure and Fair Enforcement (SAFE) Banking Act allows state-licensed cannabis businesses to engage freely with financial institutions and banks. According to reports, the House Judiciary is expected to make up several pieces of legislation and the Marijuana Opportunity Reinvestment and Expungement (MORE) Act could be one of them and it aims to decriminalize marijuana federally. 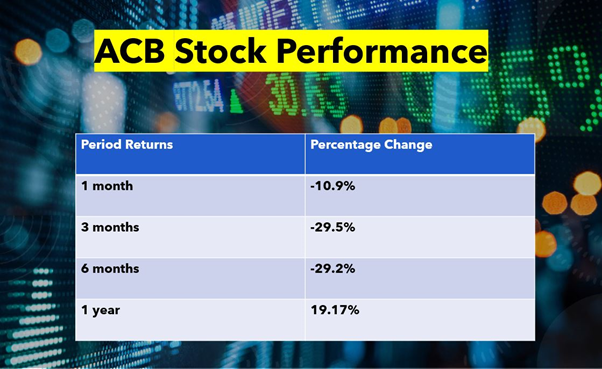 Over the last few years, cannabis legalization has increased in North America and 18 states and Washington, D.C., have legalized recreational marijuana. The US could legalize cannabis fully as Canada did in October 2018.

In the last 12 months, the ACB stock had a relative growth of 19 per cent and it outperformed the Toronto Stock Exchange 300 Composite Index that declined by six per cent in the same period.