The Canadian-listed company recently carried out Downhole Electromagnetic (EM) geophysical surveys of all technical data and information obtained from the Phase 1 drilling campaign at Pilot which consisted of 10 holes to test mineralisation along strike and at depths below the existing open pit.

Perth-based Newexco Exploration Pty Ltd was commissioned to investigate the application of DHEM in order to target gold mineralisation in sulphide-rich zones. Newexco is a consultancy group that specialises in geophysical and geological services.

Additionally, drillhole PARC014 was surveyed as a follow-up to provide additional information obtained in PARC005 hole. 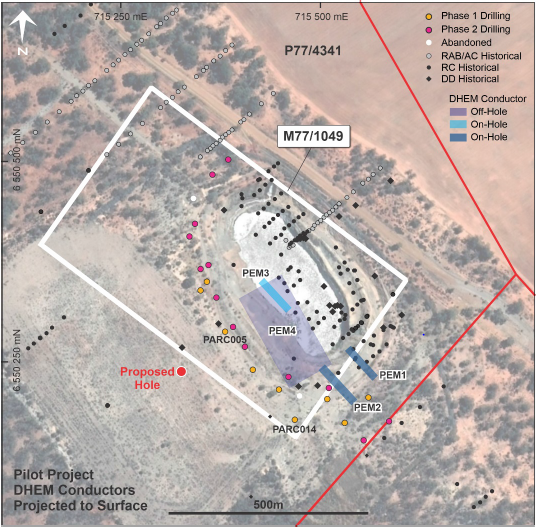 Findings of the Survey

The Downhole EM and Surface EM survey is a new development in the geophysical survey works on gold projects and are extensively used by the ASX listed gold explorers, including Bellevue Gold Limited, Apollo Consolidated Limited and Benz Mining Corp.

For the hole PARCC014, the EM survey identified two on-hole conductors. The first was a weak on-hole anomaly at the depth range of 140-145m (PEM 1), and another one at a depth of ~240m (PEM 2). Both of these conductors are interpreted as a zone of a low percentage of disseminated pyrite and pyrrhotite with low-grade gold.

An anomaly was also identified at the same depth of 200m, and the source was interpreted towards the north and below the hole (PEM 4). 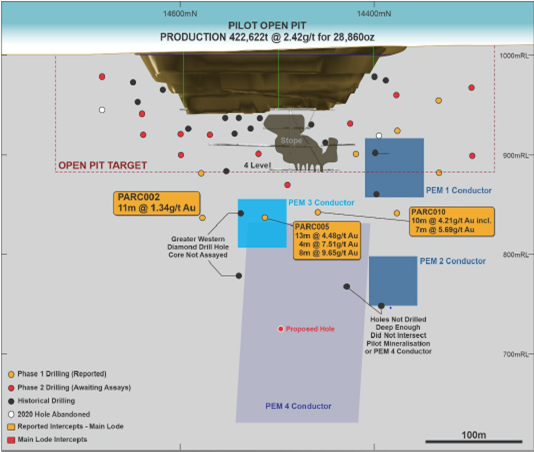 The Downhole EM survey interpreted both the results from the same source. Both the drillholes identified an off-hole conductor at a depth of around 200m. The modelling of the source using a single plate was done in accordance with the findings of the survey. The plate's estimated dimension is around 130m in strike extent with a depth extent of 200m commencing immediately below hole PARC005 where there is a reported intercept of 8m grading @ 9.65 g/t from 199m.

The findings of the EM survey can be summarised in the below table:-

Based on the findings, Newexco has recommended Altan Rio drill test the source of the DHEM conductor (PEM 4) at a position down dip from the intersection in PARC005 as well as conduct surface EM surveys along strike to both north and south of the Pilot pit.

Note: All currencies are in the Canadian dollar.