In an effort to meet emissions targets by 2030, Prime Minister Justin Trudeau announced a range of new climate change-related measures on Friday, December 10. A major one among them was increasing the federal government’s carbon tax.

The government plans to spike carbon price to C$ 170 per metric ton by the year 2030. It is currently on track to reach a price of C$ 50 per metric ton in a couple of years from now, and rise by another C$ 15 the following year.

With Canada on track to miss yet another greenhouse gas (GHG) emission target of 2030, Trudeau released the plan titled ‘A Healthy Environment and a Healthy Economy’.

While the current target for 2030 is to reduce GHG emissions by at least 30 per cent below 2005 levels, Canada is aiming at a 40 per cent reduction with the newly announced measures.

What Is Carbon Tax?

As the name suggests, carbon tax is a charge levied on the basis of how much carbon-based fuels, such as coal, oil, gas, etc. you are burning. The concept of this tax came into being with the agenda of cutting down on – and eventually eliminating – the use of fossil fuels and, in turn, protecting the environment.

While the idea may be noble, oil and gas-producing provinces like Alberta are reportedly challenging the spike in carbon tax in courts.

Alberta’s employment rate, which is highly dependent on the energy-based industries, took a sharp tumble as the sector suffered amid the pandemic. Pointing this out, the province’s Environment Minister Jason Nixon said that the federal government should not adding on to the cost of living for people in Alberta with the carbon tax. 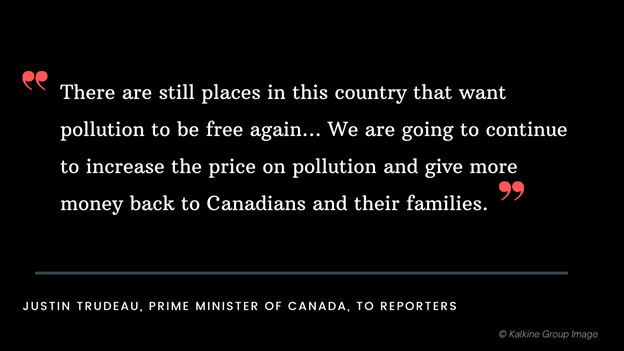 What Does Trudeau’s New C$ 15-Billion Plan Include?

What Does The New Carbon Tax Entail?

Officials at Environment Minister Jonathan Wilkinson’s department said in a recent briefing that with the new carbon tax, Canadians will have to pay up to 38 cents extra on every liter of gas by the end of 2030.

The document, however, clarified that the Clean Fuel Standard, which earlier covered all forms of fuels, has now been limited to focus on “only liquid fossil fuels”, such as gasoline and diesel, which are primarily used in transportation.

The Trudeau government’s new climate plan announcement comes not only days before the United Nations climate conference scheduled for this weekend, but also about a month after the US presidential election. President-elect Joe Biden has been quite vocal about environmental policy and has even promised to get the US back on the bandwagon of the Paris climate agreement, which was famously abandoned by Donald Trump a few years ago. Now, with an environment-conscious leader in the neighboring country, Canada seems to be pulling its socks up to meet its 2030 GHG goals.