The Toronto Stock Exchange (TSX) has announced the names of the 30 best-performing stocks in the last three years. The TSX30 list is based on the dividend-adjusted stock price performance, highlighting the diversity of the Canadian equities market.

According to the TSX, the companies in this list have created approximately C$ 250 billion market capitalization in the last three years and have recorded significant growth in the stock prices.

Let’s explore eight of these Canadian companies that saw a stock price growth of over 300 per cent in the last three years.

In the last three years, Aura Minerals stock registered a growth of 1125 per cent.

Shopify, one of the largest e-commerce platform in Canada, recorded a stock price growth of 846 per cent in the last three years.

As the e-commerce industry boomed during the pandemic, Shopify's growth was notably significant. In Q2 2021, its total revenue surged by 57 per cent year-over-year (YoY) to US$ 1,119.4 million.

Trisura Group, one of the leading specialty insurance companies in Canada, noted a stock growth of 523 per cent in the last three years.

TSU stock has also catapulted by 113 per cent in the past one year, outperforming the Toronto Stock Exchange 300 Composite Index's growth of about 70 per cent.

With a price growth of 495 per cent in the last three years, Ballard Power is among the popular clean energy stocks in Canada. It is involved in the production and distribution of fuel cells. 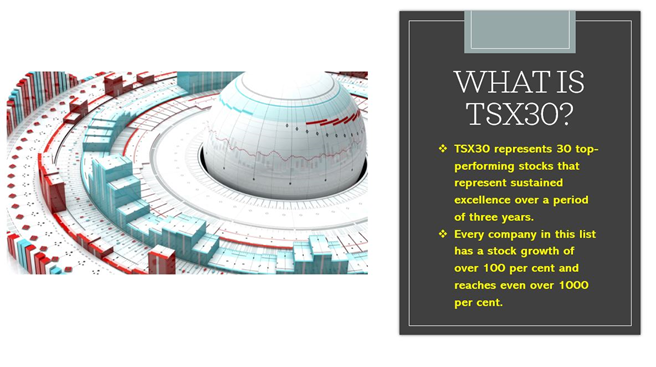 The British Columbia-based company’s stock recorded a growth of 433 per cent in the last three years.

Capstone generate an operating cash flow of US$ 110 million and a net cash of US$ 172 million with zero drawn long-term debt in the second quarter of fiscal 2021.

Champion Iron Limited saw its stocks grow by 365 per cent in the last three years.

The Quebec-based company is engaged in the exploration and development of iron ore properties.

CIA stock has expanded by 81 per cent since the past year and surged by 11 per cent year-to-date (YTD).

With a growth of 327 per cent, TSX ranked goeasy's scrip as one of the top performing stocks in the Canadian stock market in the last three years.

The company provides financial services to consumers who want to own furniture, appliances, electronic goods, and computers.

GSY stock recorded a surge of about 231 per cent in the last twelve months, surpassing the S&P/TSX Diversified Financials’s growth of 115 per cent.

Orla Mining holds several mining projects, including that of gold and silver. It is engaged in the exploration and acquisition of mineral properties with business interests in countries like the US, Panama, Canada, and Mexico.

After a continuous decline for about three months, OLA stock seems to be gaining a positive momentum as it surged by about two per cent in the past month.

The difference between its close and 30-day simple moving average was 1.9.

Also Read: Is Manulife (TSX:MFC) stock a good buy for your portfolio reshuffle?

Keeping a diversified portfolio investment is often a common advice given by stock market experts. The TSX30 list could help you take note of diversified stocks that could rake in long-term returns.