One of the leading brokerage and wealth management firms in Canada, Questrade has caught the attention of potential investors in Canada as people are looking for the offering of its common shares.

The interest in the Toronto-based firm could be due to the launch of QuestMobile, an application that has been designed for anyone who wants to start trading in the stock market.

Is a Questrade IPO on the cards?

Questrade was established in 1999 to make Canadians financially independent. Based out of Toronto, the brokerage and wealth management firm remains a privately held company and people are searching for its initial public offering (IPO) plans.

The company has not announced any public debut plans as of now and people will have to wait for an official announcement before making plans to get pre-IPO shares of Questrade, should it ever choose to go public.

The only announcement that came from the company on Monday, September 27, was about QuestMobile, an application that will enable investors to move their money, trade, and research about investments via an interface that has been designed intuitively.

QuestMobile will allow its users to see how their portfolios are performing on the go while giving relevant news to the users. An all-new Learning Mode has been introduced so that users can find handy definitions and exchange-traded funds (ETFs) information with a tap. 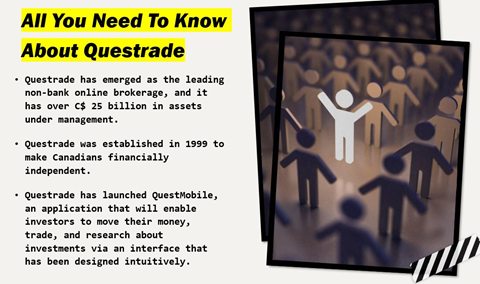 In addition, some new features, and benefits like custom watchlists and real-time snap quotes have been added to the mobile application. Traders interested in this mobile application could download it from Google Play and Apple App Store.

Along with QuestMobile, the company has also launched an upgraded web platform, with features and an interface like the mobile application.

Questrade is dubbed the fastest growing online brokerage company in Canada and some organizations have also ranked it as number one in the country. The company is changing the face of the financial services industry by offering innovative technologies and charging lower fees while giving investment options.

The Toronto-based firm has emerged as the leading non-bank online brokerage, and it has over C$ 25 billion in assets under management. Notably, Questrade opens over 200,000 accounts every year.