Reports of Instacart delaying its plans to go public have left many interested investors intrigued.

Speculations about the grocery delivery app’s listing plans have been around for a while now. Until recently, its shares were expected to hit the markets by the end of 2021.

Now, rumors have it that the company is looking to push back its listing plans and instead focus on accelerating some of grocery retail-related services.

Instacart, however, is yet to confirm any of the speculations, so one can believe that its listing can happen at some point in the future.

Here’s what is expected of its listing plans as of now.

Instacart listing – What we know

The San Francisco, California-based company has been on the list of the most highly anticipated listings for about a year now. Its popularity among interested investors leapt higher amid the pandemic as the surge in online grocery deliveries fueled its growth.

Also Read: Knightscope IPO: How to buy KSCP stock before others?

When will Instacart go public?

The first thing to know here is, Instacart has not submitted any IPO request with the regulatory bodies yet. There have, however, been reports that the grocery company was in talks with investment bank Goldman Sachs last year.

Considering that it is December already, it is safe to assume that the listing will likely take place sometime in 2022.

Will Instacart go public via an IPO?

That’s the interesting part. Some reports claim that the company is likely to go public via a direct listing (aka, a DPO) instead of an initial public offering (IPO).

What could be Instacart’s valuation?

Instacart’s valuation is expected to go as high up as US$ 50 billion at its listing, considering that a funding round in March 2021, which raked in a capital of about US$ 265 million, pulled its valuation up to US$ 39 billion valuation.

Who are Instacart’s pre-IPO investors?

Read more: Instacart May Go Public Soon, But Will It Pick IPO Or DPO? 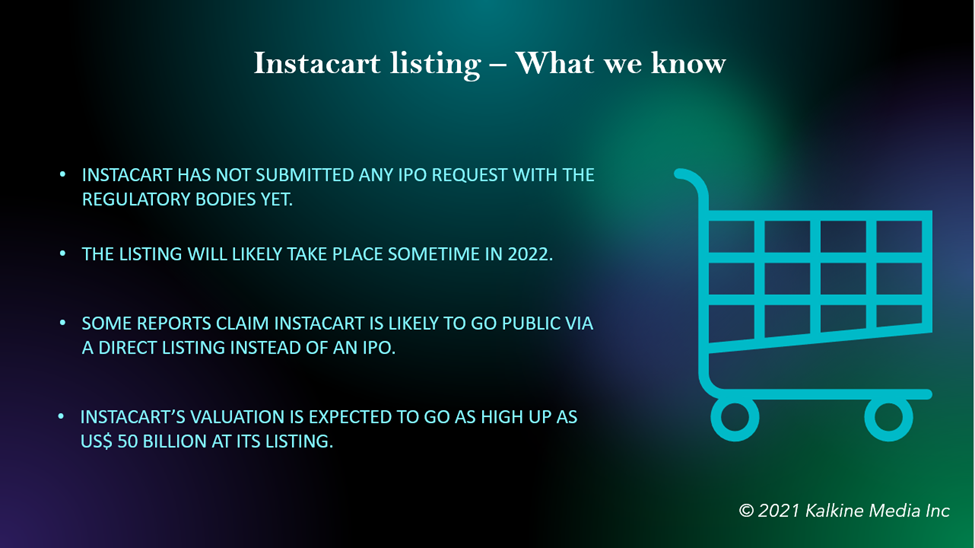 Founded in 2012, Instacart has seen a significant growth over the years. Its operational advances has pushed it into the realm of the leading online grocery providers in North America.

In September 2021, Instacart said that it has generated 186,000 net new jobs in the grocery industry since 2013, while also being responsible for increasing the revenue of US-based brick-and-mortar grocers by US$ 6.4 billion.

While the growth trajectory can interest many investors, another factor has been pulling people’s attention is the appointment of Fidji Simo as the firm’s new CEO in August 2021.

Previously the vice president (VP) and head of Facebook app, Ms Simo is said to have helped newly renamed Meta transition into a public company. Hence, her addition to the company invites the curiosity of those waiting for Instacart IPO.